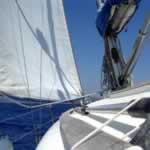 The America’s Cup, also known as “the Auld Mug”, is a famous yachting trophy with a long and colourful history.

Contested since 1851, The Cup was established when Britain’s Lord Wilton invited America to send a yacht across the Atlantic to race as part of an Industrial World Fair — otherwise known as Prince Albert’s Great Exhibition.

The Americans won that race, and various American yacht clubs held the trophy until 1983 when Australia II beat the American defender Liberty.

With Alan Bond’s funding, Ben Lexcen’s revolutionary winged keel design and John Bertrand as skipper, Australia II came back from 2-0 and 3-1 down to win, and ignite international interest in the sport.

For the 1983 series, Louis Vuitton began its sponsorship of the challenger’s series, the Louis Vuitton Cup where multiple international challengers compete for the right to contest the America’s Cup.

In 1987 Dennis Connor won the Cup back as skipper of Stars and Stripes, the team that defeated New Zealand’s first challenge in 1988.

In 1995 a New Zealand syndicate Black Magic — led by Sir Peter Blake with Russell Coutts as skipper — won the cup for the Royal Auckland Yacht Squadron. They won the qualifying series, the Louis Vuitton Cup, with a 37-1 win-loss record, and triumphed 5-0 in the final.

Skipper Russell Coutts pushed the Kiwis to a quick 4-0 lead, equalling the record for most consecutive America’s Cup wins set by Charlie Barr 100 years earlier, before handing the wheel to understudy Dean Barker who promptly became the youngest skipper, at 26, to win the America’s Cup.

Shortly after this win, Russell Coutts and Brad Butterworth said they were leaving Team New Zealand to front a Swiss challenge, Alinghi.

Sir Peter Blake, New Zealand’s leading yachting figure and a keen environmentalist, was killed by pirates on the Amazon river in 2001. Team New Zealand carried on, accepting challenges for the 2003 race series.

In 2003, led by Coutts and Butterworth, Alinghi won the America’s Cup in Auckland, 5-0.

In 2010, the 33rd America’s Cup in Valencia was won by BMW ORACLE Racing, sailing under the flag of the Golden Gate Yacht Club, San Francisco, against defenders Alinghi, flying the colours of the Société Nautique de Genève, Switzerland, on Sunday 14 February.

In September 2013 Team New Zealand challenged Oracle Team USA for the cup. The teams sailed giant hi-tec catamarans. Racing on San Francisco Bay under skipper Dean Barker the team was just one win away from taking the cup but went on to lose 9 - 8.

Oracle Team USA is scheduled to defend the America's Cup in 2017.