The truth can be rough, can be inspiring, or depressing, or fascinating - or all of the above. Good biography writers know that, and know exactly how to grip you in with stories of real people and the astonishing lives they've lived - or are still living.

Biographies are a way to see history and culture in a new way, through the eyes of someone who has lived it. Here's four stories of four very different moments in time, straight from the top of my ever-growing For Later, opens a new window list.

In Order to Live: A North Korean Girl's Journey to Freedom, by Yeonmi Park.

The story of how two brave woman, Yeonmi and her mother, escaped from North Korea through China.

I've heard this book is equal parts harrowing and inspiring, as it gives her account of her escape, plus the story of her life in North Korea and her new life as a human rights campaigner in the US. She sounds incredible. An important book.

Take Six Girls: The Lives of the Mitford Sisters, by Laura Thompson.

"Enthralling" "charming" "scandalous"  are three descriptions I've heard of the sisters in this book. I had vaguely heard of the Mitford Sisters before but it wasn't till a couple of months ago when I was travelling with my cousins when someone (charmingly) compared us to the six Mitford sisters that I started looking into them and hoo boy, they're marvellous! This is going to be a good one.

The Girl Who Stole Stockings: The True Story of Susannah Noon and the Women of the Convict Ship Friends by Elsbeth Hardie.

Because stories of the women who were sent to Australia as convicts promise to be fascinating! This ship full of women, from murderers to pickpockets, shipped to the other side of the world. Honestly, what a story.

Susannah Noon, who wasn't even a teenager when she was convicted of theft, had an amazing life, from England to Australia and then over to New Zealand, as one of the first hand witnesses to the conflict between Te Rauparaha and the New Zealand Company! 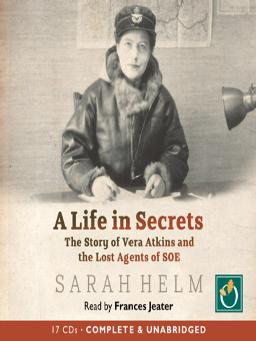 A Life In Secrets; The Story of Vera Atkins and the Lost Agents of SOE, by Sarah Helm.

Ok so, a couple of years ago I read this amazing book called Code Name Verity by Elizabeth Wein, a story about two young female operatives in World War Two, a pilot and a spy. It was incredible, so when I found out that this book, A Life in Secrets, was highly recommended by the author, it was immediately part of my to-read list.

So, got any true stories on your For Later lists?