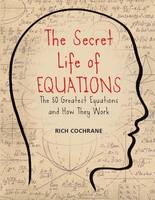 The Secret Life of Equations: The 50 greatest equations and how they work.

Before we go any further I need to come clean. I have no interest in equations and I have no mathematical ability, but even I could appreciate this book!

l=Iω: Apparently this is useful for iceskaters and explains why when an iceskater pulls their arms in, they decrease "moments of inertia," and the velocity or speed automatically increases. Who would have thought there was actually an equation for this? It would seem that there is an equation for everything. How to choose your next secretary? Try p( χ) = - χln(χ) . Filled with pictures and set out in a way that you can dip into this could well be a good introduction to viewing the world from a different perspective.

The Secret Life of Equations

Real Raw and Relatable: A Collection of Stories from the people of South Auckland.

This is a lovely book. Humans of South Auckland was created out of the tragedy of suicide, and from that came this book, a gentle reminder of humanity and the power of story.

These are usually the words that follow when I tell someone I'm from South Auckland...

"So do you carry a knife with you, you know like...just in case?"

My answer is generally "yes, I do, but I carry a fork too, 'cause I never know who's going to invite me to dinner.'

The book that inspired the movie. This is the story of Desmond Doss, a conscientious objector, who served in the American Army’s 77th Infantry Division in World War II. Desmond was a medic who refused to carry a weapon and, for this, was often insulted by his fellow soldiers. However, during the battle for Okinawa he rescued 75 soldiers and became the first and only conscientious objector to receive the Medal of honour. The DVD is on due for release in March and is on order for the library.

And from the Fiction Selector...

The mystery and thriller genre leads the fiction and it shows little evidence of it tailing off. For a start, vast numbers of readers will be waiting for the new Paula Hawkins novel Into the water. For those who like the historical mystery, Lindsey Davis is back in Ancient Rome with The third Nero. Two men on the trail of a woman on the run is the focus of the latest Mason Cross novel Don’t look for me. William Shaw is described as a crime writer with a social conscience and his latest, Sympathy for the devil is worth waiting for.

Bestselling French writer Delphine de Vigan has an intriguing story of what happens when a close friend tries to steal her friend’s life. If the dark Scandinavian thriller is to your liking, there’s an interesting one, Quicksand, by Malin Persson Giolito. And if all these thrillers keep you up at night, why not try one of the many British Library Crime Classics which give you light thrills but not shudders.