Parenthood is an experience that has forced me to learn a great many things quite quickly, from the practicalities of keeping a small human alive and well cared for, to the importance of patience and empathy, to the best stain removing techniques for household carpeting - there's a lot of new information to take on board, particularly in that first year or two. 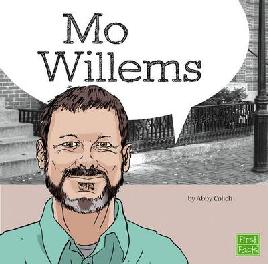 As my child has got older another thing I've learned - something I thought I already knew - is what makes a really good picture book. And American author and illustrator Mo Willems makes some really excellent ones.

Having already had a reasonable amount of experience of picture books when I was little, and having some favourites of my own, I assumed that there wasn't much else to know, but I've since discovered a world of children's authors who either weren't publishing when I was young, or who, like Judith Kerr, I just missed somehow. One of the most consistently enjoyable picture book authors I've enjoyed the last few years has been Mo Willems. If you care for a young child and love the pure sound of their high-pitched peals of laughter then you could do worse than pick up one of Willems' books to entertain them with. Before venturing into children's literature Willems worked as an animator on Sesame Street and that same anarchic humour comes through in his books.

Willems' tales have that most desirable of picture book qualities - re-readability. That is to say, you can pick up Don't let the pigeon drive the bus, for instance, and even after the 10th or 20th or 50th read you'll still find it charming. Willems has a great talent for creating stories that are slightly unexpected. There's nothing pat or cliched about them. In fact, some of them are downright subversive. Take Goldilocks and the Three Dinosaurs, in which the eponymous heroine of the tale narrowly avoids being turned into dinosaur dessert, but not before her gluttony is made plain, as is the ludicrousness of the fairytale set up - what sort of child barges into a house in the woods so brazenly? Is it any more ridiculous to have dinosaurs in this story than it is bears? Hey, is that a photo of the aforementioned pigeon in their house?

It is. The pigeon is a sort of icon of Willems' children's books, making cameos in any number of his stories.

The pigeon is a fantastic character and in addition to his "uncredited roles" in Willems' work he has a whole series of adventures of his own in which he variously tries to drive a bus, tries to stay up late, wants to eat a cookie, wants to eat a hotdog, doesn't want a bath etc. and makes a great deal of emphatic, scenery-chewing arguments as to why he should be allowed to do exactly what he wants. He's a character that every child can relate to (as can every adult). 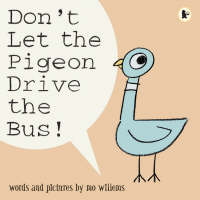 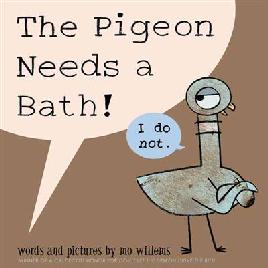 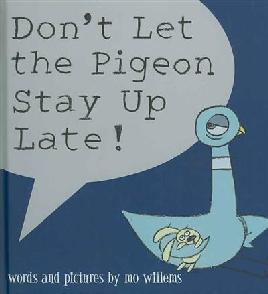 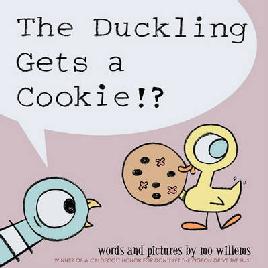 In a recent interview Willems described the pigeon thusly:

I try to think that the Pigeon is a core, fundamental, philosophical being. He is asking the fundamental, deep questions: What is love? Why are things the way they are? Why can't I get what I want? Why can't I drive a bus? I mean, you know, Sophocles.

Another thing from this interview that really struck me was his advice to parents who want their children to be artistic, which is to do that thing yourself, model its importance by giving it your attention.

I think sometimes the greatest thing you can say to a kid if a kid says, "Hey Mom, will you do this for me?" or "Make me a sandwich," or something — say, "Not now, I'm drawing.

Kiddo and I have recently discovered that a number of Mo Willems titles have been adapted as short videos and are available via Kanopy Kids. There are a selection of pigeon titles there and the Knuffle bunny stories, as well as Goldilocks and the three dinosaurs. Willems himself voices the pigeon, and his family voices some characters in these and other stories.

There are a bunch of non-Willems picture book adaptations too including Where the wild things are, The great white man-eating shark, Scaredy Squirrel, I want my hat back, Harry the dirty dog, Mother Bruce and the How do dinosaurs... series, but the Willems titles are by far our favourites. We've added a "phone story" (as kiddo calls them) into our bedtime story roster, mixing it up with the more traditional format.

If you're keen to try out some of Willems' work, be aware that the pigeon books don't stay in the bookbins for long, but the Kanopy Kids videos are available any time. If you've got older kids who are now reading on their own his Elephant and Piggie titles are also worth a look.