NZ Poetry Day started off with a bang on Thursday night, with Phantom Bill Stickers fantastic event: 'Four Readings and a Festival'.

Against the wonderful backdrop of Turanga, four local poets, all 'brilliantly different' as compere Joanne Preston (a fine poet in her own right) accurately noted, recited their work, and recounted their creative writing journeys.

All 'first time' poets with one volume of poetry to their credit thus far, they were all clearly in love with their craft, and delighted to share this love with their audience. Gail Ingram, author of 'Contents Under Pressure' was the first to take the mike. Widely published and recognised in New Zealand and internationally, Gail, in Joanne's words: "Keeps winning prizes, but we still love her". She read four extracts from her brutal but beautiful novella told in poetry, which was inspired by post earthquake Christchurch. It is the story of a mother coping with a broken city and two broken sons- one who is suffering with severe depression, the other who is experimenting with marijuana. She turns to graffitiing her anguish on the city walls:

because not everyone fits into the current aesthetic, the noise of social media, the 40 hour week
because when they ask you what you do, and you say just a mother, and they say that's the most important job, you don't believe them
because you believe them
because of the cracks in the wall
because
because this shade-this shade of indigo"

As Ingram explained: "graffiti, like poetry, can be the desperate response when nothing else is left- in Christchurch, street art was the response to the devastation of the city":

Gail explained that her work uses: ‘fractured language, to show how organizations use language against us and how language runs through our lives’.

Victoria Broome spoke next, a delightful poet who nearly bought the room to tears with her poems about family and relationships. Author of ‘How We Talk to Each Other’, and winner of the CNZ Louis Johnson Bursary in 2005, Victoria has also been nominated twice for the Kathleen Grattan Award (2010 and 2015). Victoria read poems about her father who recently passed away in June including this prayer:

Eyes that will find you / a throat that will let you sing / ears that listen for the sound of mercy.’ And as for death, here we go, ‘Back in time, forward in time / until you are tucked up again and uterine.’

Taking over was a very different different poet again, Marisa Cappetta. Author of ‘How to Tour the World on a Flying Fox’ , Marisa graduated summa cum laude from the Hagley Writers Institute. James Norcliffe beautifully described her work as being: ‘wonderful constructs, products of a soaring imagination and sometimes surreal connection, which, coupled with a keen eye and a poet’s sensibility, make for a wonderful ride for reader or listener’. Her readings included a poem about apple strudel, a hat tip to her German ancestry, and even a most welcome reference to libraries with ‘love in the Bindery’ a gorgeous poem about her husband who works for Christchurch City libraries itself:

"My love collects the spines of retired books
that are sliced from their pages by people
who have no sympathy for stories.

Front and back cover, leaves, all cut away
like scapular, alula and tertial feather,
rendering the volumes flightless.

He arranges the spines like boards side by side,
and ties them together with strips of soft cotton rag.
Gradually he builds a sea-plane and helps

me aboard with a steadying hand..."

Erik Kennedy took the mic last with readings from his collection of poetry 'There's No Place Like the Internet in the Springtime'. Erik immediately informed us that he missed out on one prestigious prize given out to first works, because his chapbook Twenty-Six Factitions, was deemed long enough to be his first work, but "I am not at all bitter about this as you can tell'. Erik chose to read one family poem to fit in with the theme , as 'everyone else seems to have a chosen a poem about family- my family isn't interesting though and this is the only poem about one of them in the volume". With that lack of fanfare, Erik launched into a recital of 'The Family Lore Poem' along with, 'Remembering America (a poem inspired by the frequent question 'Do you miss home?'), 'Double Saw Final at the Canterbury A&P Show' and my favourite of the suite, 'You can't Teach Creative Writing':

"...And, really, how are you going to see anything
of Dubrovnik or Yangon in just a few hours
with that white cruise ship floating admonishingly in the harbor
like the bleaching skeleton of a chopped- down skyscraper?
No, if you really wan to see Dubrovnik
you're going to have to live there,
in the alleys and wynds and mews,
and that metaphorically speaking, is my advice to you,
writer who wonders if writing can be taught:
move to Dubrovnik." 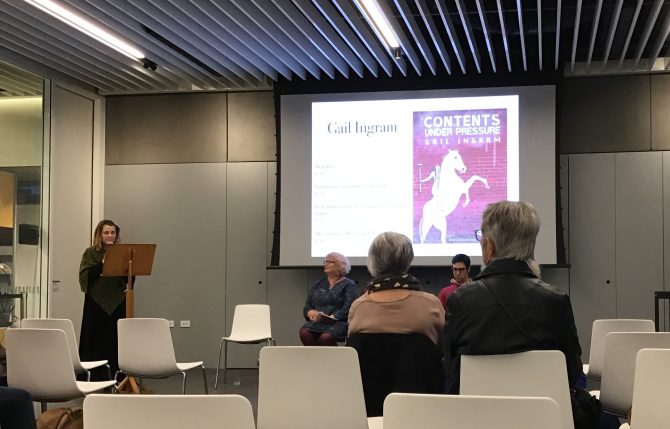 Unusually and luckily for us, Joanna then gave the writers a chance to share their creative journeys with the audience through a series of questions.

'Why Poetry?' She asked.

For Gail, poetry has always been in her nature: "It keeps me alive. When I'm not writing I feel a bit useless."

For Victoria, the answer was "Sylvia Plath", or more specifically a volume of Plath that was given to her as a troubled teen by presumably an irresponsible adult.

For Marisa, it was simply "Dr Seuss". And Erik? "We can do things alot more immediately than in other literary forms", he concluded. He reflected that he likes to keep a trauma diary and synthesise it into poetry.

Gail fears that she may not be able to write when she stops. Marisa has to always write in a red exercise book now, while Erik finds putting his poems into a ziplock bag and reading them in the shower can greatly aid his creativity: "Of course this doesn't always work, or I'd be in the shower constantly!" Joanna shared that she always has to write with a blue pen, but at lest she doesn't have to worry they'll be a shortage any time soon.

Their experiences of being published? Gail had an amazing publisher who allowed her to put the collection together as she wanted it, with the inclusion of illustrations. Victoria submitted her work spontaneously on the suggestion of a friend, and was accepted first go.

"I didn't know how to email, so sent it off in the post... I had to learn how to email it on the acceptance".

Marisa's work was a long time in the editing stage, around 8 years. The hardest part for her was not the writing "but putting them in order". As for Erik, he had no idea he was being published until a friend mentioned it, apparently the publisher had forgotten to flick him an email.

When they've finished a poem, how do they feel?

The general consensus was, completely certain its the most fantastic thing, until they've read it.

Finally, Joanna brought up the million dollar question - is anyone working on another volume of poetry at the moment? Gail says yes, though this time her poems come from more of a political and feminist angle. Victoria began some poems earlier in the year but then her father passed away: 'I'm waiting, just waiting'. Marisa has finished a second book, which again is more political than her last. Erik too has more work on the way, also looking more at politics in particular focusing in on climate change and capitalism.