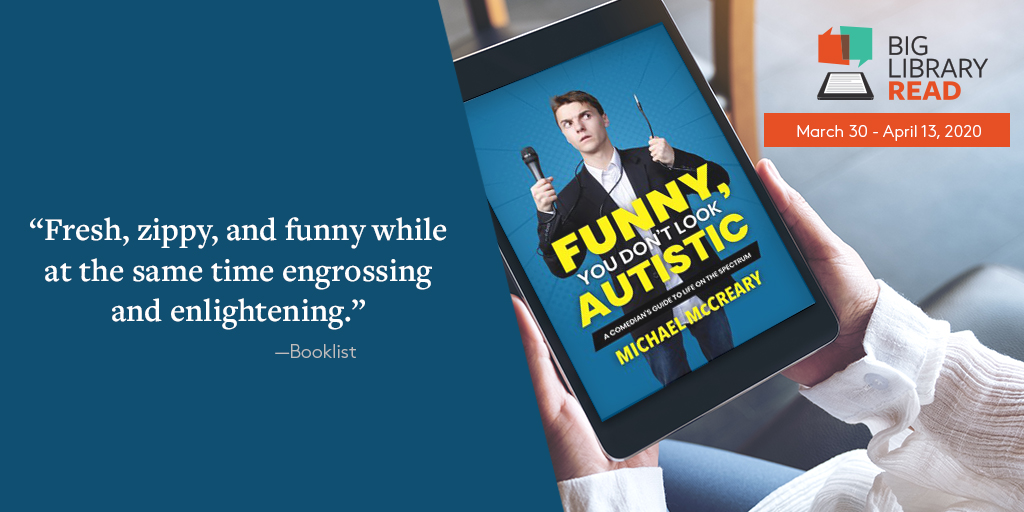 Christchurch City Libraries patrons can join thousands of readers around the world in laughter and learning during Big Library Read, the world’s largest digital book club. From 23 March  to 13 April, booklovers can enjoy stand-up comic Michael McCreary’s hilarious yet insightful memoir Funny, You Don't Look Autistic from their public library as an eBook or eAudiobook with no waitlists or holds.

Christchurch City Libraries readers can join by visiting christchurch.overdrive.com or downloading the Libby app, then discuss online at https://discuss.biglibraryread.com/.

Funny, You Don't Look Autistic is stand-up comic Michael McCreary’s memoir in which he points out that autism "looks" different for just about everyone with Autism Spectrum Disorder (ASD). Diagnosed with ASD at age five, McCreary got hit with the performance bug not much later. During a difficult time in junior high, he started journalling, eventually turning his pain into something empowering—and funny. This unique and hilarious #OwnVoices memoir breaks down what it's like to live with autism for readers on and off the spectrum. Funny, You Don't Look Autistic is an invaluable and compelling read for young readers with ASD looking for voices to relate to, as well as for readers hoping to broaden their understanding of ASD.

Big Library Read is available in over 22,000 libraries and schools around the world, including more than 90 percent of public libraries in North America. It is facilitated by Rakuten OverDrive, the leading digital reading platform for popular eBooks and eAudiobooks. Big Library Read is an international reading program that simultaneously connects millions of readers around the world with an eBook through public libraries. Funny, You Don't Look Autistic is the 21st selection of this program which began in 2013 and takes place three times per year. Readers can join an online discussion about the book at https://discuss.biglibraryread.com/. The free program runs for two weeks and only requires a library card to get started.

Funny, You Don't Look Autistic was published by Annick Press and can be read on all major computers and devices through Libby or libbyapp.com, including iPhone®, iPad®, Android™ phones and tablets and Chromebook™ without waitlists or holds. The title will automatically expire at the end of the lending period, and there are no late fees.

To join the discussion, learn about past Big Library Read titles and download Libby, visit biglibraryread.com.