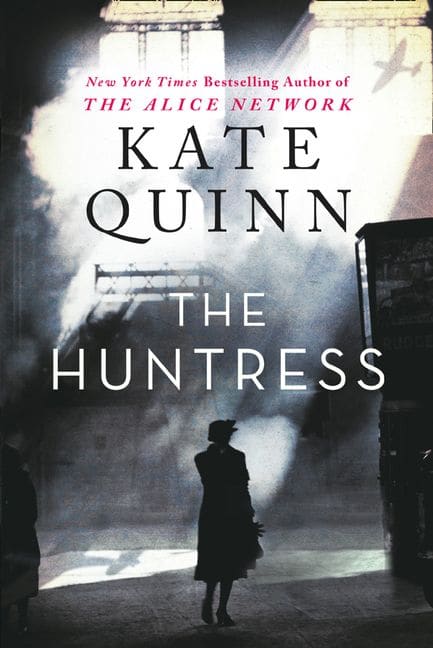 Born to a family living on the shores of Lake Baikal in Siberia, Nina's life is full of rusalki  (evil Russian and Hungarian lake witches) right from the day she's born. Living in isolation is a good thing when your father has strong views on Comrade Stalin, but Nina wants to fly, and for that she has to change her whole way of life, and move towards civilisation. Does she have what it takes to become one of the Night Witches, and protect Russia from the Nazis, one bombing run at a time? Will she ever be able to escape the rusalki, even far away from the lakes she grew up near?

By 1945 die Jägerin, the Huntress, has killed her way through Poland, killing those who cross her path. Whoever they are - English prisoners of war, refugee children looking for safety on their escape to freedom - it doesn't matter, they are all disposable. But now die Jägerin needs a way to escape her past, and make sure authorities won't catch up with her. She is the Huntress, and the Huntress will not become the hunted.

It's 1946 in Boston, and Jordan McBride is meeting the new woman in her Dad's life - a newly-arrived Austrian widow with her young daughter, Ruth. Jordan immediately takes to her new little sister, but there's something about the Austrian widow Anneliese that just doesn't sit right with her. But then Jordan's always had a talent for making up stories ... so is this just another case of an overactive imagination, or is there something more sinister going on?

Back over in Europe, Ian and Tony are doing what they've done since the war finished several years earlier: chasing and apprehending those who helped keep the Third Reich powering on until its end in 1945. Both of them hold on to the things they saw during the war, and know they are helping to create a safer Europe, but for Ian this is only a temporary job as he gets ready for his main goal: capturing die Jägerin alive so she can pay for the crimes she's committed.

Over the course of 500-plus pages, we get to meet and know each of these characters. Their strengths, their weakness, their loves and hates, and what it is that drives them to do what they need to do. It's a fascinating story, a real page-turner, and I thoroughly enjoyed getting caught up in the action. Particularly in the first two-thirds of the book, I thought I knew where the story was headed... but I was happy to be proven wrong. I had thoroughly enjoyed listening to the audiobook of Kate Quinn's last book, The Alice Network, opens a new window, and was excited to see if this book was as enjoyable. Descriptive language makes this book a pleasure to read - you really can visualise the events in your head as you read it, and the non-chronological way the story is told means you find out information about characters at interesting times, and feel like you're meeting real people.

The author's note at the back of the book provided some more information about the places and events mentioned during the story. Although this story is fiction, it does make you think about the events of World War II and the following decade, and I found myself taking breaks from my reading to see if events were based on fact. I particularly enjoyed researching more about the Night Witches, the female Russian pilots, and was spurred on to learn more about them, and about Marina Raskova, the woman involved in setting them up. There are some fascinating stories about them, and I recommend learning more about them if you're keen.

The Huntress is a thoroughly enjoyable read, and look forward to the author's next novel.