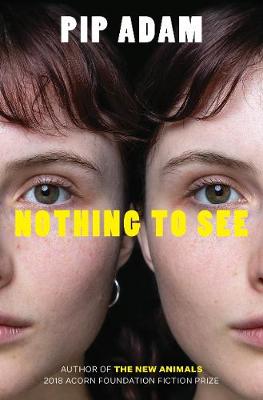 Peggy and Greta are joined at the hip.

Peggy and Greta have been through rehab.

Peggy and Greta are drug-seekers. There's a picture of them at the chemist.

Peggy and Greta have been beaten up and raped.

In her third, Jann Medlicott Acorn Prize short-listed novel Pip Adam creates a compelling, confusing narrative that lifts the lid on the underbelly of addiction.

Nothing to See charts the lives of a group of women from the 1990s to the present as they deal with the repercussions of heavy drinking and drug-taking; to become sober, productive members of society.

The two main characters in this story are so close that they appear to be one person. Adam blurs the personal pronouns between these two, more often than not referring to them as 'they' - but not adding a plural to separate them, which leaves the reader asking, are they gender neutral, or is there more to it?

Without alcohol, Peggy and Greta are a new person: newborn to experience, and unknowing of themselves without being wasted.

"Life was pretty boring without drink or drugs" is a repeating refrain.

Tempted every day, they attend AA meetings and avoid places labelled 'dangerous'  -  the chemist, the house where they sought drugs and booze in return for sex - which was more often than not taken from them - and brutal.

The title refers to Peggy and Greta's way of assimilating in society, but also to their state of sobriety. Under the influence, they did things they could not remember or control.

Sober, they are better equipped to deal with personal responsibility: "not knowing where they stood, but knowing what they had done and who they were."  (p.49)

The sense of nothing to see permeates the story. The phrase repeats through the book like an echo. The main characters, noticeably different to observers, go out of their way to hide from view, or appear like everyone else, to the point of working from home.

"This was one of the reasons it was important for them to stay sober. Drunk, or angry, they would've blown it up. 'What?' What are you looking at kid? They needed to stay calm and let it pass. It would settle if they just left it alone. People would realise there was nothing to see. Nothing that concerned them. It had sunk into the manners of society. It was part of the oil that kept cogs going. But they knew they still stuck out." (p.210)

Pip's narrator asserts that over time, difference in individuals has become something we as a society no longer focus on. Yet, how others see us is something we still obsess over.

The setting, or sense of place in this book is as diffuse as its characters. New Zealanders who have lived in our biggest cities may recognise bits, but the setting is not a theme, just a backdrop. Christchurch is identifiable by its plain, and punting, while Wellington in part two is described by its hills and trains.

Is the story personal? Adam is quick to point out, (in her interview with Kim Hill) that

"Fiction...will often start with a personal story, but because I'm asking a question of fiction, it can't stay personal, "it has to move off to other realms."

The story or character, says Adam, will take off from there, giving the story space to work on the writer instead of the writer working on the story.

Adam's narrative, as it unfolds over time, includes an overview of the evolution of phone technology, and its sinister twin, surveillance.

I'm about the same age as Pip, and remember the old dial phone in the hallway; ringing up friends after work to see what they were up to - having to get flat-mates to hunt them down to come to the phone.

As the years pass, character Heidi's premonition of 'always being glued to screens' comes true. Peggy and Greta's moderation in life becomes moderation as a job, on the internet - which enables them to work from home, unhindered and (supposedly) unobserved.

The lines between reality, always tentative in this book, become more wonky as real people appear to look like sims, and sim people are harvested for their personal information. I'm not sure gamers are an accurate representation of the general populous but after reading this I'm a lot more shy of playing 'what character are you' on Facebook.

Is Nothing to See a comment on how technology splits the self? Pip suggests that for her, the struggle is between 'extreme ego and personal terror. The split between public and personal persona is perhaps more common in the age of tech.

In this incarnation, firestorms in the media flare up and disappear as quickly as solar flares:

"It was like the people in the rollercoaster park, but it was real people who could be made to line up and ride. ...She'd said yes to this, and by saying it she was shouting at the fire, from inside the fire, 'Here I am.' And she rested the notebook on her thigh and wrote, I'm seen, and immediately wished she was invisible again." (pp.318-9)

"She stood at the bench... scrolling through Instagram and then had a look at TikTok. Then she looked at Tinder, and there was nothing. No one. Everything would be fine. The panic had slowed down... and the story had disappeared from almost every news site and social media feed... there was nothing to see here..." (p.321)

How does Adam realise characters in the way she does? She is a genius and an illusionist: her readers question both their perception and sense of reality. Pip told Kim Hill that she had studied engineering when she wrote I'm Working on a Building - did she work in IT and mental health as well? That's quite an impressive character study.

Nothing to See brings to mind other great books of this ilk. The disappearance and reappearance of everyday objects makes me think of Yōko Ogawa's The Memory Police, while the examination of mental illness is reminiscent of fellow Kiwi Gudrun Frerichs' Girl From the Tree House. Janet Frame's Scented Gardens for the Blind is also paid homage, as Peggy and Greta enjoy the kinesthetic fragrance of plants at a local community garden.

This book is an incredible adventure into the mind, which will mess with your head. But I can honestly say it has a happy ending.

The New Animals merges the fashion industry with evolution - based on Adam's experiences in hairdressing  - to make a comment on an older, cynical generation versus the new: a sincere generation, reinventing the world with no understanding of irony.

I'm Working on A Building

This is an ambitious book about an ambitious project to recreate the Burj Al Khalifi, the tallest tower in Dubai, on the West Coast of New Zealand. This book centres around a fatal flaw - but is it in the personality of the engineer, or the plans for the building?

Pip's first, a book of short stories, won the NZSA Hubert Church Best First Book Award for Fiction in 2011, and established her as an experimental writer, a term she adores.

Everything We Hoped for

The Jann Medlicott Acorn Prize will be awarded to fiction writers from New Zealand during the Ockham Awards ceremony on 12 May.

This year the judges will be Kiran Dass, Paul Little, Claire Finlayson and internationally acclaimed Native American writer Tommy Orange, author of There There.