Across our libraries, we have a bunch of people passionate about recommending the best stuff for teens and young adults. This month we have some old favourites and some recent releases.

Sadly my hold didn't arrive in time for Halloween, but it was worth the wait! Rainbow Rowell and Faith Erin Hicks are an amazing writer/illustrator duo! Deja and Josiah have spent every Fall holiday working at the Pumpkin Patch, an autumnal fun park. They're 'seasonal' best friends.

Pumpkinheads takes place on their last night together at the Pumpkin Patch - next year they'll be heading off to university and they don't know if they'll be back. Deja makes it her mission to make their last shift the best one yet! They're going to try all the snacks they've never eaten, check out all the rides they've never ridden, and - most importantly - Josiah is finally going to talk to that girl he's been crushing on for the last three years. Pumpkinheads is a fun wee odyssey which explores relationships and friendships.
Alicia - Hapori | Community, Tūranga

The Woman Who Rides Like A Man by Tamora Pierce

This is the third book in the Song of the Lioness series and it does not disappoint. There is a very strong theme of female equality in this book as Alanna begins her first adventures outside of the castle as a knight. She ventures out into the desert where she finds herself entangled with the Bahzir tribe and their way of life, learning how to hone her magic and her fighting abilities. This novel is full of joy, heartbreak and everything in between. It is fantastic, just like its predecessors.
Stacey - Matuku Takatako: Sumner Centre 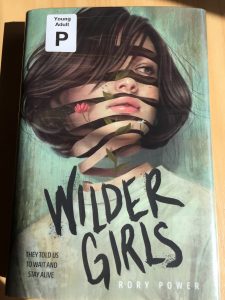 This book should come with a warning that you will not sleep! This sapphic horror made my skin crawl and had me so gripped I had to read it in one go. The Raxter boarding school girls have been left to fend for themselves as the “tox” takes over the island. This tense, graphic and brutally gory read is not for the faint hearted. The story follows three friends and tests the boundaries of their friendship when two go in search of the missing third. Who can be trusted and what secrets are being kept? Is there anyway to escape the tox?
Katie - Community Learning Librarian

I also loved this book. It's definitely inspired by the organic horror of Annihilation by Jeff Vandermeer. There's a film adaptation of it on Netflix (a bit different from the book - no surprises there!). If you love Wilder Girls or are looking for dark and weird sci-fi horror, give Annihilation a read. If you want more LGBTQIA and horror, try Sawkill Girls by Claire Legrand.
Alicia - Hapori |Community, Tūranga

Dorothy Must Die by Danielle Page

A mix of sass and nostalgia this series is one I can’t stop re-reading.

What happens when the “wicked” are the only ones willing to make a stand? Twisted, power- hungry, and addicted to magic Dorothy is madder than the March Hare. She is destroying Oz for her next fix, has enslaved the populace, and her rule is absolute. It’s time for a new Kansas Girl to fix this mess! With the help of enslaved munchkins, renegade monkeys, and wicked witches the series follows Amy Gumm as she tries to kill Dorothy and save OZ.

Dark, twisted and full of flawed characters this series will change the way you look at OZ forever.
Rachael - Upper Riccarton Library

The Secret Commonwealth by Phillip Pullman

One Of Us Is Next by Karen McManus

One Of Us Is Next

Sequel to One of Us is Lying, set one year later at Bayview High, with a slightly different cast of characters but featuring Maeve, younger sister of Bronwyn from the first book. This book looks to follow a similar vein to the first, with a deadly game of Truth or Dare, where there are a lot of secrets that unravel as the story is told. I really enjoyed One of Us is Lying, it is a page-turner with plenty of twists and turns and even if you think you have figured out the mystery, you still don’t quite know why until the very end. I am eagerly awaiting this follow-up in January and have already placed it on hold!
Amy - Linwood Library

I was scrolling through my Libby app one night looking for something to read and I came across this book by one of my favourite YA authors – Marie Lu. It turns out that this is a novel in the series called DC Icons and it involves a bunch of well-known YA authors writing up back stories for the Icons we know and love such as Batman, Wonder Woman, Superman and Catwoman.

Batman Nightwalker fills in the gap when Bruce Wayne is just finishing off high school. He lives with Alfred at Wayne Manor, does some martial arts training to manage his anger issues and is beginning to show some of his trademark vigilante tendencies. In this book, Bruce’s antics land him with community service at Arkham Asylum and he becomes fascinated with one of the city’s most dangerous criminals who is his age and leads him down a reckless path.

I enjoyed this lighter take on the Batman series and Marie Lu made the story fit in so well with the Batman stories we already know. It was a short and fast-paced read and I am looking forward to reading the others in the series. Catwoman is up next for me!
Amy - Linwood Library

We Contain Multitudes by Sarah Henstra

Jonathan Hopkirk and Adam Kurlansky couldn’t be more different to each other. One a fan of poems and language, the other a star football player, they have nothing in common. But forced to write letters to each other for a class assignment, a relationship begins to form, and ends up taking over all aspects of their lives.
Kate - The Library at Te Hāpua: Halswell Centre

The Mist-torn Witches by Barb Hendee

The books in this series so far are: The Mist-Torn Witches, Witches in Red, Witches with the Enemy, and To Kill a Kettle Witch. These fantasy books are not classed as YA at Christchurch City Libraries, but I certainly would have loved them as a young adult.

The books centre around two orphaned teenaged sisters who learn about their special abilities in the first book. The older sister Celine can see into a person's future, while the younger sister, Amelie, can see a person's past. Celine is also a gifted healer, a skill that she learned from her mother. The first book sets up the premise for the rest of the stories. The girls are allowed to live in a prince's keep as the domain's healer in exchange for helping the prince in various difficulties running the kingdom. The girls solve mysteries, become embroiled in political disputes, and fall in love. The novels are all quick and fun to read.
Bonnie - Aranui Library

Through A Dark Glass by Barb Hendee

Through A Dark Glass

Barb Hendee's Dark Glass series is also tremendously creative, combining old, familiar stories with choose your own adventure-type fun. A magic mirror appears to people who are at a crossroads, showing them the outcomes of their different choices. Each of the four novels feature one hero's options. The stories feel familiar and comforting - like well fleshed-out fairy tales. If you're looking for a decent series to keep you entertained during the upcoming school holidays, this is a good one! Like the Mist-Torn Witches series, the Dark Glass stories are not classed as YA at Christchurch City Libraries but do have crossover appeal.
Bonnie - Aranui Library

The Black Flamingo by Dean Atta

Prayers for the Stolen by Jennifer Clement

Prayers for the Stolen

Last month was Hispanic Heritage Month in the USA so I read a few books from those recommended readings lists. Christchurch City Libraries has a copy of Prayers for the Stolen by Jennifer Clement. This novel is about a teenage girl growing up in a dangerous and poor part of Mexico - a place where girls are disguised as boys to keep them hidden from the drug traffickers who are the only people in charge in that area. The story follows Ladydi Garcia Martinez from the ages of roughly 12 to 15, with flashbacks to her childhood. She hides from drug lords, supports one of her friends who was stolen by them, tries to escape that world by working as a nanny in Acapulco, learns secrets about her family and finds her place in her changing world. Though the situations that Ladydi faces are not ones that many readers are likely to face (the author says in a note at the end that Ladydi's story is an amalgam of stories of people that she has met or worked with), her reactions to them are believable and easy for the reader to empathize with. This is a good tale.
Bonnie - Aranui Library