Kids at Queenspark School were super lucky to get visit from a rock star this week. Stig Wemyss, one of the most popular narrators of audio books for kids, visited the school as part of his 'Stig at the Library' NZ tour.

Stig Wemyss is an actor, writer and the voice behind heaps of children's audio books.  If you have borrowed kid's audiobooks from the library before you're almost certain to have heard him read you a story that had you laughing out loud. He has narrated stories by the funniest authors around, including Paul Jennings and Andy Griffiths.

According to Stig, narrators are the 'rock stars of kids books,' and he certainly showed us why. He treated the kids of Queenspark School to an hour of silliness and laughter.  He showed us what it takes to be a narrator and got heaps of the kids up the front with him to try his audition techniques.

He read one of Andy Griffith's short stories from his book Just Stupid and had everyone engrossed in the story. It is no wonder that Stig is so popular because he is a natural performer who brings Andy Griffiths' and Paul Jennings' crazy, silly, hilarious stories to life.

Stig has been touring NZ to promote Borrow Box, a great new eResource that libraries around the country, including Christchurch City Libraries, now have available for customers. 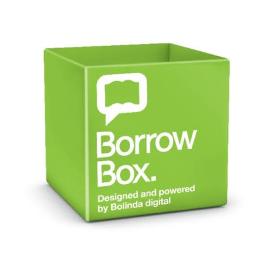 With Borrow Box you can borrow and download eAudiobooks to your computer or mobile device whenever you like, wherever you like. There are heaps of eAudiobooks to choose from, including books by Andy Griffiths and Terry Denton, Jacqueline Wilson, Enid Blyton, Morris Gleitzman and Jackie French.

Check out Borrow Box now and download an eAudiobook read by Stig Wemyss.  I guarantee it will have you laughing out loud.