We have joined Talking Books Book Club from uLibrary. Talking Books allows listeners to enjoy the same audiobook at the same time and discuss it not only with members of Christchurch City Libraries but with Talking Books members around the world.

Every month a new great adult’s audiobook will be added to your local library’s uLibrary's Book Clubs tab for you to listen to and discuss for one month.

Book of the month for May is The Port Fairy Murders by Robert Gott, a superb psychological study, as well as a riveting historical whodunit. 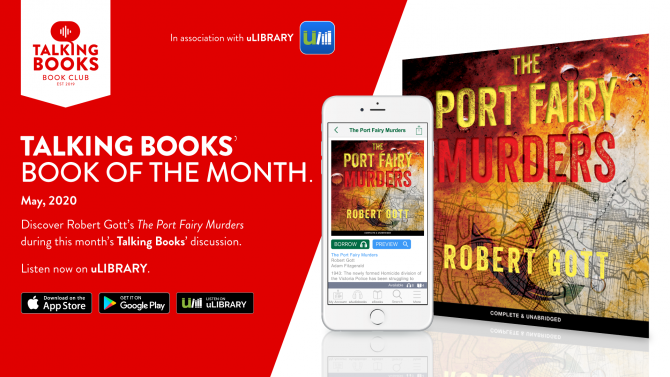 1943: The newly formed Homicide division of the Victoria Police has been struggling to
counter little-known fascist groups, particularly an organisation called Australia First that
has been festering since before the war. And now there’s an extra problem: the bitter
divide between Catholics and Protestants. Detective Joe Sable and Constable Helen Lord
are working to track down the ruthless George Starling, who in turn is planning to wreak
vengeance on them for the downfall of his nationalist group and mentor. At the same
time, the duo is called to investigate a double murder in the fishing village of Port Fairy.
The solution seems straightforward, but it soon becomes apparent that nothing about the
incident is as it seems - and that investigations which appeared unrelated are tied by a
disturbing thread.

Go to uLibrary or the app if you using a mobile device. If using the app go to the Book Clubs tab and click the link to join Talking Books Book club. On the website you will need to click My Account, then log in with your library card and pin. Then the Book Clubs tab will appear then join up from there.