Talking Books Book Club from uLibrary has a great new title for August, The Rock Blaster by Henning Mankell. Henning Mankell’s first novel explores the reflections of a working-class man who has struggled against the constraints of his station for his entire life. 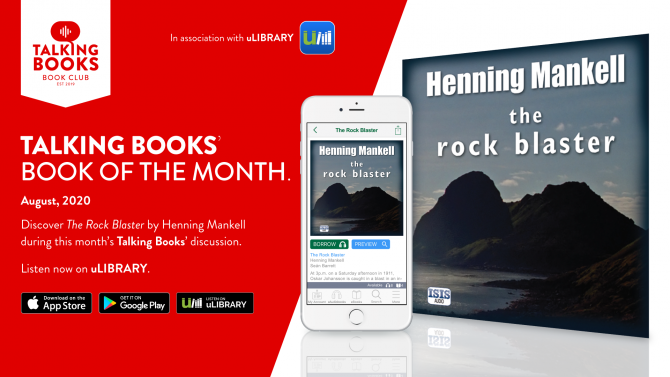 The Rock Blaster by Henning Mankell

At 3pm on a Saturday afternoon in 1911, Oskar Johansson is caught in a blast in an industrial accident. The local newspaper reports him dead, but they are mistaken. Though crippled, Oskar finds the strength to go on living and working. The Rock Blaster charts his long professional life - his hopes and dreams, sorrows and joys. His relationship with the woman whose love saved him, with the labour movement that gave him a cause to believe in, and with his children, who do not share his ideals. Remarkably assured, Henning Mankell’s debut is written with scalpel-like precision, at once poetic and insightful in its depiction of a true working-class hero.

Go to ulibrary or the app if you using a mobile device. If using the app, go to the Book Clubs tab and click the link to join Talking Books Book club. On the website you will need to click My Account, then log in with your library card and pin. Then the Book Clubs tab will appear then join up from there.
Note: On the app you will need to log off and log back on after joining.