20 October 1948
“Pleasure Garden” art controversy begins when a Frances Hodgkins painting (done in about 1933) is exhibited at “the Group” show. This fierce debate on art style was joined by people throughout New Zealand. It raged for 3 years until the City Council accepted the painting as a gift on September 3, 1951.

22 October 1863
First Agricultural and Pastoral Association show in showgrounds (which is now Sydenham Park). An “unofficial” show had been held in October, 1862.

22 October 1985
“Elizabeth” the one tonne sea elephant dies of a viral infection on Sumner Beach. She had lived for 5 years on the City’s beaches, estuary and rivers and was often found crawling up suburban streets. She has recently been immortalised in Elizabeth, Queen of the Seas by Lynne Cox. 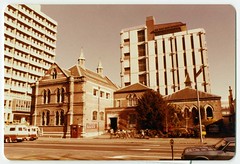 Canterbury Public Library : Taken from across Cambridge Terrace, showing Postal Centre behind the Library and Police building on the left Between 1973 and 1981 Flickr, Arch-52-PH-07-23

24 October 1870
Disastrous fire (New Zealand’s most extensive to that date) destroys the centre of Lyttelton.

A timeline of Christchurch events in chronological order from pre-European times to 1989.

More October events in the Chronology.