10 December 2018 marked 70 years since the adoption of the Universal Declaration of Human Rights (UDHR) by the United Nations General Assembly. Guest for this episode - University of Canterbury lecturers Natalie Baird and Jeremy Moses, grassroots activist Rāwā Karetai and Human Rights Commission lawyer John Hancock - as they both celebrate and problematise the impact of the UDHR on human rights at the international, domestic and community levels.

Part I: What is the UDHR?; What are its core principles and key issues?; Who does the UDHR apply to?; What measures are in place to uphold the UDHR?

Part II: Impact of the UDHR at the international and domestic levels

Part III: Impact of the UDHR at the community and personal levels

Part IV: Conclusions: What has been the impact of the UDHR? Does it do enough?

Transcript of UDHR at 70

Mentioned in this episode 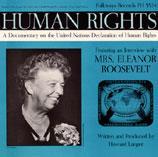