Dr Nick Barratt is visiting New Zealand next month as part of Auckland Libraries' fabulous Family History Expo but first he is coming to visit us in little old Christchurch.

Historian, author and broadcaster, Nick is best known as the former lead researcher for the TV series Who Do You Think You Are? and to my mind has gained considerable personal fame by making the hardman of British broadcasting Jeremy Paxman cry on national television. Jeremy, notorious for for his relentless grilling of politicians and withering sneer, recently decried the United Kingdom as a nation of "snowflakes" but was brought to tears in series 2 when he found out his widowed Glaswegian great-great grandmother was denied poor relief after an anonymous letter claimed she'd had an illegitimate child. Family history is not for sissies, Jezza! 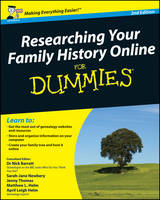 Some of the celebrities Nick's team researched during series 1-4 include: Barbara "Oooh saucy" Windsor, "Born to Mince" star Julian Clary, the inimitable Stephen Fry and lovely little Graham Norton. I've also got very vivid memories of Jeremy Irons galloping around on a horse absolutely desperate to be Irish, Jeremy Clarkson's purple faced fury at finding out his family's fortune had been squandered away and Matthew Pinsent's pedigree roll tracing his lineage to Adam and Eve via Edward I. Although most of the people researched seem to be called Jeremy, these seasons also included a few Davids (Tennant and Baddiel), Moira Stuart, Nigella Lawson, Vic Reeves and an Oddie called Bill, amongst others.

Nick's talk explores the impact of the internet and broadcast media on family history research, taking it from a dusty marginal hobby to the mainstream activity of today. Using celebrity cases studies from Who Do You Think You Are? he'll look at how the show was commissioned, filmed and researched and its wider impact.

Nick will be speaking on Thursday 8 August between 6-7.30PM in the Tautoru/TSB Space on Hapori | Community, Level 1 at Tūranga. This is a free event and no booking required.