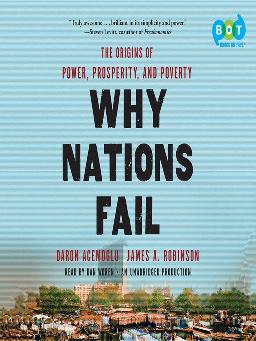 Why Nations Fail is pretty much a must read for anyone interested in why some countries are prosperous and liberal, and why others aren't. That doesn't mean that I espouse its blatant and latent prescriptions or agree with the entirety of the historical narrative that it provides. However, this book deals with the moot and divisive questions which have been rousing academics and lay persons for a long time now: why are some countries rich, productive and (mostly) safe, while others are poor, unproductive and unsafe (internally and externally)?

Economist Daron Acemoglu and political scientist James Robinson attempt to provide answers to these questions through a relatively intensive historical, economic, legal and political exposition. What they come up with is intriguing and fresh. First, the authors attempt to debunk the familiar theories of progress (or lack of) which claim culture, weather and geography are the underlying reasons countries and people groups sink or swim economically and socially. Their primary thesis for what enables countries to enter prosperity rests on what they label and describe as "extractive" and "inclusive" political, legal and economic systems of exchange, but with this comes a focus on institutions, as it is institutions which are pivotal in fostering or hindering political and economic development and innovation.

"Extractive" systems are loosely defined as exclusive political and economic systems where power is centralized and where there are few checks and balances on that power - thus keeping those in government and the elite of such systems free from legal processes which might undermine their monopolies on power and industry. Therefore, such systems don't foster competition and most importantly innovation, because if citizens in such economies pioneer certain innovations, then they may loose the rights to be partakers in the dividends that such innovations provide due to elites hindering their involvement as economic actors.
Fundamentally, these systems don't protect private property rights as there is no real legal provision for such rights, or the multiple institutions to keep corruption at bay simply don't exist (like a Commerce Commission or a State Services Commission). These systems basically restrict wealth creation as those in power want to slow technological progress so that their sector of the economy remains under their control. Essentially innovation among citizens equals competition, and competition brings about instability for an illiberal regime.

"Inclusive" systems, however, distribute power to more citizens because individuals have the ability to amass wealth through innovation and development, and those ruling and overseeing various sectors of the economy don't hinder their progress because there are numerous legal processes and stipulations in place which prevent them from doing so. What flows from this inclusive institutional framework is incentives: incentives to study, work, save, create, share and innovate, because such toil will not be in vain, and will provide rewards. This framework fundamentally comes down to such rights being embodied in laws, as humans cant be trusted, a typical constitutional theory which simply isn't manifested in many countries.

All this might seem a bit simplistic, or even obvious. But the authors draw on centuries of economic and social history to get their points across, which actually leads to 500 page readerthon in which the authors communicate their core messages through different points and examples - typical of the academic requirement to produce lots of evidence so as to ward off scrutiny. This includes some fascinating stuff from the history of post-Renaissance Europe, the Americas, the two Koreas, Africa. They consider the divergent paths taken by the English and Spanish colonial super powers in their acquisition of new lands and the processes they set up for governance which led to (a degree of) inclusion or exclusion today. The authors provide clear historical links between the colonial era and now which flows nicely and doesn't seem disjointed.

Further, they make a bunch of predictions. China, they claim, will not be able to sustain its massive economic growth (8.85% over the last 4 years), because they do not have the requisite inclusive political systems. Their economy is like that of Soviet Russia which sustained massive periods of growth from the 50s to the 70s, but simply could not last due to individual citizens not being able to take control of their innovations in a constrained environment.

I still feel factors such as climate and geography have a significant bearing on a country's ability to become prosperous. But the findings in this book reveal a dimension critical to the discussion of economic, political and human well-being. This dimension is so fundamental that aid, culture, trade, geography and climate are all contingent on there being inclusive institutional frameworks.

In New Zealand, while we aren't a perfect country, we arguably take our democratic and economic institutions for granted. It is fair to say that many (most?) countries throughout the world don't enjoy the liberal framework that we do. This book demonstrates how and why this is.