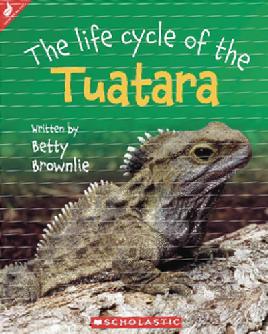 The tuatara (which means spiny back in Māori)  belongs to an order of reptiles which first appeared 220 million years ago when the dinosaurs were alive. All overseas relatives of the tuatara died out about 50 million years ago. The scientific name for this group is Rhynchocephalia, which means "beak-head". Two different species of tuatara, including Gunther’s tuatara, were recognised in 1989. But in 2009, further research concluded that tuatara are just one species. Now only about 60,000 – 100,000 survive in the wild on 32 of New Zealand’s offshore islands.

Tuatara are commonly found sharing burrows dug by seabirds such as petrels, prions and shearwaters. The birds' droppings help fertilise the soil in the burrow, making ideal conditions for the invertebrates fed on by the tuatara - wētā, beetles, spiders and earthworms. Unfortunately for the seabirds, their eggs and chicks also sometimes provide food.

Tuatara are nocturnal, coming out of the burrows at dusk to feed on the invertebrates, but will also come out during the day to bask in the sun while the food eaten the

previous night digests. They are also known to eat young tuatara. As a result, young tuatara tend to be more active during the day and hide from the adults at night. As reptiles, tuatara eat, move and live slowly. They have a long life-span, somewhere between 60 and 100 years.

Male tuatara will fight to mate with the available females. If a tail is lost in one of these fights, the tuatara will grow another to replace it. The female lays her eggs (up to 19 at a time) eight to nine months after mating and buries them in a nesting hole. These eggs will not hatch for another 11-16 months, when the hatchling breaks out of the egg and burrows through the loose soil to reach the surface. The sex of the offspring is decided by the temperature of the eggs, with eggs incubated under warmer conditions producing males. The young tuatara can take up to 9-13 years to become an adult, but will not reach their full size of 56 cm and 600 grams (males) or 45 cm and 350 grams (females) until they are 25-35 years old.

Tuatara were once widely spread throughout New Zealand, but the introduction of first the kiore (Polynesian rat) and then pigs, dogs, cats and other predators, gradually reduced their numbers until only the off-shore island populations were free from predation.

Populations of tuatara have been relocated to other islands while their own islands are made rat and cat free. One other threat to tuatara in recent years has been the smuggling of the reptiles, with tuatara fetching high prices from collectors overseas. Only a few export permits have been issued for tuatara to be sent to zoos in Europe and the United States - all other export is highly illegal, and heavily punished when discovered.