Access the fully searchable Time Magazine Archive dating back to its first issue in March 1923 through to December 2000. 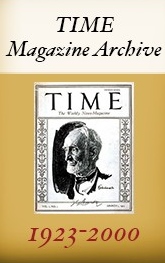 Use the Time Magazine Archive Now

Published weekly by Time Inc., the magazine was intended to be read in under an hour. Capturing the relevant news for each week the magazine focused on conveying to a broad audience both domestic and international news and analysis on a spectrum of subjects. Due to this it is an important research tool for every aspect of 20th-century history and life. Subjects covered include:

Use at a library or enter your library card & password / PIN

Time was the creation of two young journalists, Henry R. Luce and Briton Hadden, who wanted to start a magazine that would be aimed at busy readers who sought a concise and systematic approach to news. Time’s format of short articles summarising information and arranged in “departments” covering such fields as business, education, science, law, sports, books and more soon became the standardized format that many other newsmagazines used. Time attained a circulation of more than 175,000 by 1927, and around four million by the end of the 20th century.

All information and images in the Time Magazine Archive is also included in eResources Discovery Search.