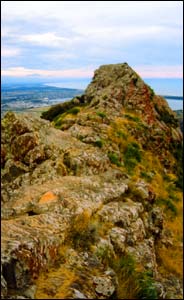 Te Tihi o Kahukura, meaning The citadel of Kahukura or the pinnacle of the rainbow, is the prominent outcrop of rock punctuating a tight corner of the Summit Road that winds above Ferrymead.

Today its intricate rock faces are popular amongst rock climbers.

Kahukura, after whom the rock is named was also known as Uenuku in the North Island. He was the spirit guardian invoked by tribal tohunga and appealed to for advice and omens in times of war. Each hapū had an image of Kahukura, often a small carved wooden figure, which was kept in a tapu place.

A literal translation of Kahukura is red garment and the rainbow is the celestial embodiment of Kahukura in our skies.