New Zealand was one of the first countries in the world to follow Britain and declare war on Germany. This followed Germany’s invasion of Poland and Britain’s declaration of war following the expiry of the British government’s ultimatum to Germany to withdraw from Poland (9.30pm New Zealand standard time, 11am British summer time).

The war against Germany ended with their official surrender early in the afternoon of 7 May 1945, New Zealand time. The acting prime minister, Walter Nash, insisted that VE Day be delayed until May 9 following the official announcement of British Prime Minister Winston Churchill. Once the official celebrations got underway 25,000 people marched through Christchurch in a People’s Victory March organised by the Trades Council.

The war against Japan continued until 15 August 1945 when news of the Japanese surrender arrived in New Zealand at 11am. Celebrations began immediately and continued for two days of public holiday.

New Zealanders in World War 2
A guide to information about the men and women who served in the New Zealand armed forces during World War 2.
World War 1939 - 1945
Search our catalogue for items about New Zealand’s involvement in this war.
World War 2 photographs
View photographs from the second world war on the Discovery Wall.

Material from our archives including:

Norfolk Island diary and other jottings, World War II, 1941-1943.
Notebook diary written by George Whitley, N.Z.E. (Corps of Royal New Zealand Engineers), who was posted to Norfolk Island during World War II. Diary begins in September 1942 and ends in April 1943.
The Transport. Z. 6.
A small magazine published during the voyage of the First Echelon, 2nd NZEF to Egypt, on board HMNZ Transport Z.6., M.S. Sobieski. 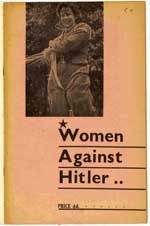 Women against Hitler…
Published by National Executive of the Communist Party of New Zealand, [1943]
World War II Local Defences Trail
The Sumner Redcliffs Historical Society invites you to a self-guided walk of approximately five kilometres, passing places of interest to those who wish to imagine what the area looked like in the years from 1939 to 1945.