This is a true story. This is two stories. It is a history of Timbuktu, a place with myth and legend wrapped around it, and it is the tale of librarians and archivists who worked hard to protect precious manuscripts from destruction. 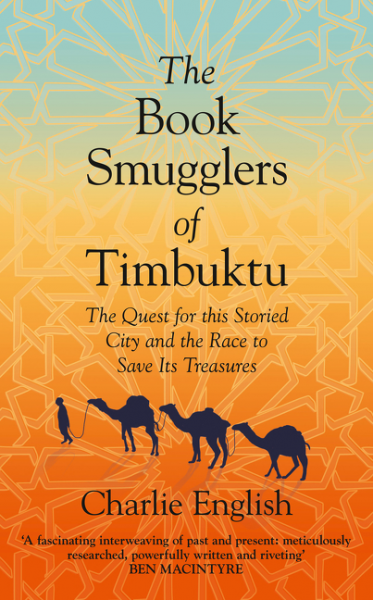 The Book Smugglers of Timbuktu details the events of 2012 as Timbuktu (in Mali) comes under the control of jihadists linked to al-Qaeda. Rare manuscripts are under threat. The fear is that these cultural treasures will meet the same fate as historical sites destroyed by the fundamentalists. Archivists and librarians — and in particular Timbuktu librarian Abdel Kader Haidara — come together and formulate a plan to spirit away manuscripts. They smuggle them out via a network of helpers, concealing and transporting them away by land and sea.

The drama of 2012 alternates with chapters about history and the various explorers who sought after the city of Timbuktu. In 1788, Sir Joseph Banks (naturalist on the Endeavour with Captain Cook) was part of the African Association Committee considering the exploration of Africa. Timbuktu was a golden unknown, and yet this Committee and others had it pegged as a place of great wealth. It became an alluring target for European explorers.

These historical chapters tell us a lot about Timbuktu, and the adventures and horrors that faced various explorers who got there, or didn't. They also unveil the fiction and myth-making at the heart of its histories, and how people chased after a place that didn't really exist.

The story is as punchy, thrilling, and exciting as a thriller. But it doesn't take the easy route and is not simply an adventurous yarn about heroic librarians. Charlie English has done a mass of reading, research, as well as interviews and first-hand reporting. Were there really hundreds of thousands of manuscripts? How bad was the risk from the jihadists? What happened to all the money donated by various international agencies? He scrapes away bluster and lily-gilding, working away at finding the truth, and he gets as close to it as he can. The Book Smugglers of Timbuktu is a brilliant piece of research, and a history with layers and depth.

The Book Smugglers of Timbuktu: The Quest for this Storied City and the Race to Save its Treasures
by Charlie English
Published by HarperCollins New Zealand
ISBN: 9780008126643

The Book Smugglers of Timbuktu

Read articles by Charlie English in The Guardian:

William Dalrymple's review sums up the brilliance of this book: The Book Smugglers of Timbuktu by Charlie English review – how precious manuscripts were saved

More about the librarians of Timbuktu