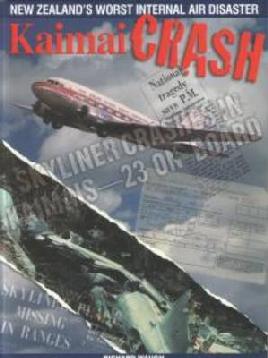 On 3 July, 1963, DC-3 Skyliner ZK-AYZ Hastings, on route from Whenuapai, Auckland, to Tauranga, crashed into a vertical rock face in the Kaimai Range. The plane was just minutes from landing at Tauranga. All 23 people aboard were killed in the crash. The wreckage of the plane was found in a ravine high in the Kaimai Range. This made access to the crash site very difficult and was the first time in New Zealand that helicopters were used in a search and rescue operation.

On Wednesday 3 July 1963 at 8:21am, ZK-AYZ Hastings left Whenuapai Airport, Auckland, on a flight to Tauranga. Conditions were stormy, with wind and low cloud. 23 passengers were supposed to be on the flight, but 3 passengers made last-minute changes to their plans and did not catch the flight. The flight was supposed to take only 48 minutes.

At 9:06am the pilot contacted the Tauranga aircraft control tower and gave an estimated arrival time of 9:08am, and requested permission to begin his descent. However, when the control tower tried to make contact at 9:14am and again at 9:16am, there was no reply from ZK-AYZ.

People on the ground had seen the plane flying low, and one man working at Gordon Quarry heard awhoofing sound after hearing the plane fly overhead.

The police were contacted and the plane was officially declared missing just after 9:30am. A preliminary search party made up of workers from the quarry set out in the direction in which the plane had been seen heading, but bad weather conditions made them turn back.

Search and Rescue personnel and soldiers from the New Zealand Army joined the search, but their search parties were also driven back by the strong winds and heavy rain.

A pilot from a Wanganui-based helicopter company drove overnight to the Kaimai Range to join the search. Following the directions of the quarry workers, the helicopter began searching along the ridgelines of the hills. A RNZAF Bristol Freighter also joined the search from the air.

At 11:58am the crew of the Bristol Freighter found the wreckage of the missing plane in a ravine high in the Kaimai Range, and difficult to reach on foot. A closer inspection by helicopter was unable to spot any survivors.

Rescuers were dropped as near to the site as possible by helicopter, but were still unable to make their way to the wreckage that day.

The weather cleared the next day and the recovery operation began, using a second helicopter. Ministers flown in by helicopter and hovering above the site of the crash held a short church service before recovery of the bodies began.

The plane had flown into a vertical rock face. Fire had destroyed almost all of the plane wreckage, and 22 of those on board died instantly. One person survived the impact, but died soon after.

A court of enquiry was held later that year to investigate the reason for the crash. Over 60 witnesses were called to give evidence.

Winds at the time of the accident were much stronger than forecast, and may have reached up to 70-80 knots without the crew realising it. This would have meant that the plane would have been drifting to the west of the planned route.

The court found that the pilot had probably thought he was on the eastern (Tauranga) side of the Kaimai Ranges, and had begun his descent to Tauranga Airport from the wrong position.

It was also possible that equipment on board such as the radio compasses, may not have been operating reliably in the weather conditions. The DME (distance measuring equipment) on board the plane could not work as there was not the equivalent equipment on the ground at Tauranga Airport. This was installed shortly after the crash.

The Kaimai Range was known for the strength of the down draughts there. It was thought that the plane was caught in a particularly strong current that was too turbulent for the pilot to climb out of, and the crash into the ravine had been the result.

Another plane was caught in down draughts near the Kaimai Range that day, but managed to power out of the wind current. The weather they had encountered was reported to the Tauranga control tower and Tauranga Airport was closed, but ZK-AYZ was already missing.

A memorial to the crash was dedicated on 5 July 2003, on the 40th anniversary of the crash, at Gordon, near Matamata.