Book event blog posts have a formula: introducing the author, setting the scene and then a chronological or thematic account of the literary chit-chat. But I’m feeling rebellious, so no entrée, no mains and straight to dessert. What is Francis Spufford, opens a new window going to serve up next on the fiction front?

He is currently working on a new novel (hurrah!) set in South London and starting in the year 1944 when a German V2 rocket fell on a branch of Woolworths in New Cross killing 168 people.  Each chapter is set in a different year, so far he has got to 1949, and the volume and diversity of research has been hugely challenging. To date he has had to get his head around the intricacies of lino printing, 1970s reel-to-reel technology, what working on a suicide prevention helpline would be like, Nazi skinheads and being a female backing singer in Los Angeles in 1979…whew!

Back on book blog script - Francis Spufford is a non-fiction writer who has moved into novel writing to great acclaim, winning both the Costa Book Award , opens a new windowfor first novel and the Ondaatje prize, opens a new window. He appeared as part of New Zealand Festival Writers & Readers in association with WORD Christchurch, opens a new window. Chris Moore was in the interviewer chair at The Piano and the audience was well-dressed and largely mature female in makeup.

Asked about his late-in-life move into fiction, Francis Spufford replied that as an academic teaching creative writing, at Goldsmiths University of London, he felt ashamed giving advice and guidance on writing fiction without have dipped his own pen in the fiction ink.

He set himself an ambitious agenda for his first novel as he wanted to include: “a duel, a rooftop chase, a trial scene, a love story, bone-crunching violence, rude sex, a mystery and jokes” plus set it in the 18th Century New York and with at least a nod and a wink towards the language and style of the new 18th Century novel. “A mass of incompatible pleasures now but quite in keeping with the period” where “serious intentions and low pleasures could be stuck in together”. It did involve compromise and became essentially a 21st Century novel in an 18th Century manner but one which allows the reader to feel a sense of time travel but without the style being too verbally off-putting.

Setting the novel in historic New York was also important to him as he was drawn to the satisfying reversal of the city past and present:

Mr Smith, the mysterious central character, is a city-slicker — a London sophisticate travelling to the small and provincial New York “a Jane Austen sized village”. This New York is highly politicised and on surface level patriotically Royalist but the reader is aware that change is coming and that British influence is waning.

Francis Spufford was extremely knowledgeable and passionate about early US history, his retention of information researched some time ago but instantly recalled was enviable! He drew parallels between early New York and the US today saying “paranoia about tyranny has featured throughout its history” but he also lamented the topicality of his novel. He hadn’t anticipated Donald Trump and the focus on modern America’s paranoia and darkness.

Francis Spufford also spoke about his Christian faith and the process of writing Unapologetic, opens a new window — his response to Dawkins' God Delusion, opens a new window. His aim he said "was to write a book that wouldn't convert but would make belief recognisable to the reader" that faith was not "superstition or madness but meeting some human need". He was anxious about creating a backlash as he wrote it not as "a good-tempered argument between faith and atheism" but in a more pugnacious attempt to show "that religion didn't belong in a zoo of weird things but was a human norm".

This was a bookishly warm and entertaining hour and if you haven't read Francis Spufford, opens a new window,  pull finger and get on with it! 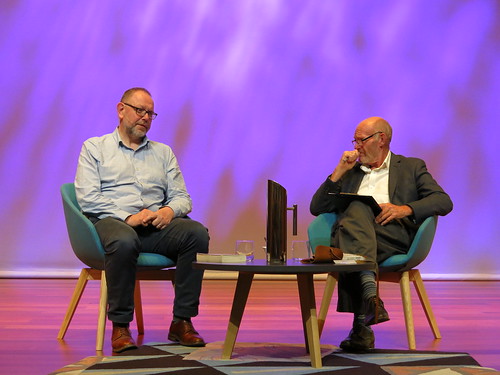