You can see his diary now:

Edward's war started with embarking on the Waihora in December 1916 with the New Zealand Expeditionary Force, 19th Reinforcements, New Zealand Mounted Rifles Brigade. Aubrey served in Egypt; and after being wounded on 5 November 1917 part of his left leg was amputated. 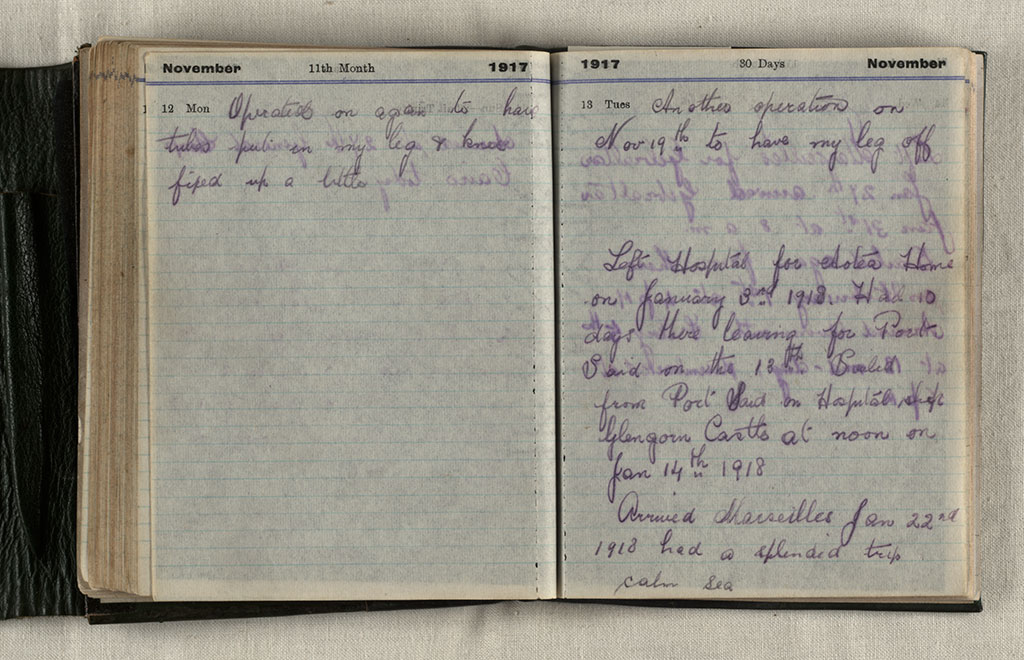 His diary offers a good insight into goings on of the First World War - the fighting, but also the waiting and day-to-day life (see 28 June 1917):

Nothing startling has happened here today. We have put in the time in the same old way doing some reading & writing and having some arguments. 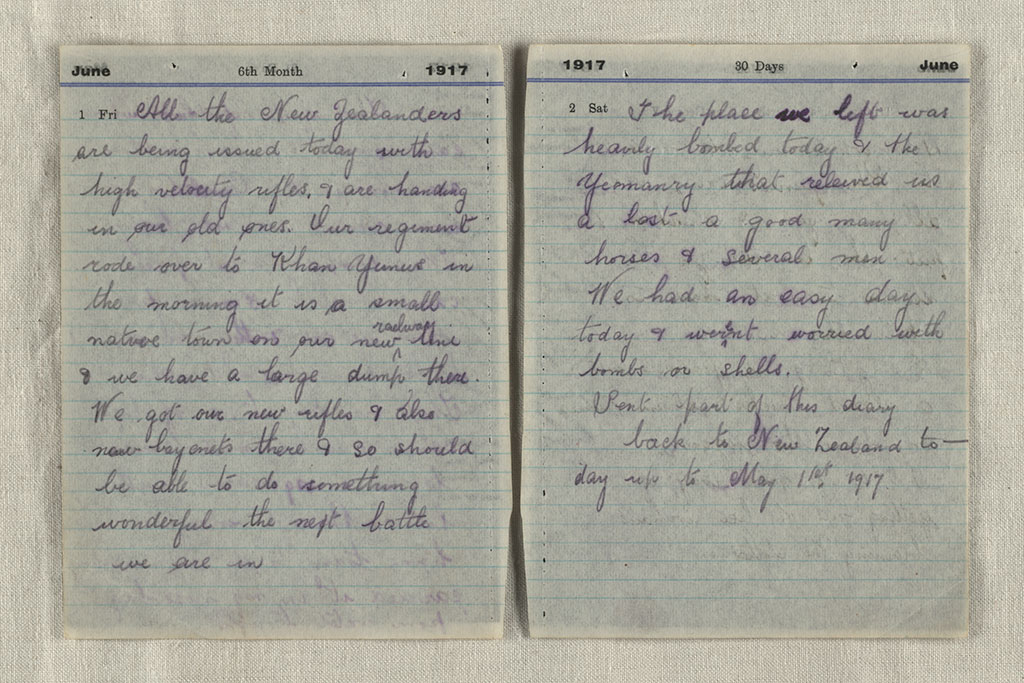 All the New Zealanders are being issued today with high velocity rifles & are handing in our old ones. Our regiment rode over to Khan Yunus in the morning it is a small native town on our new railway line & we have a large dump there. We got our new rifles & also new bayonets there & so should be able to do something wonderful the next battle we are in

1917 June 2 Sat
The place we left was heavily bombed today & the Yeomanry that relieved us a lost a good many horses & several men. We had an easy day today & weren't worried with bombs or shells. Sent part of this diary back to New Zealand to-day up to May [1st] 1917 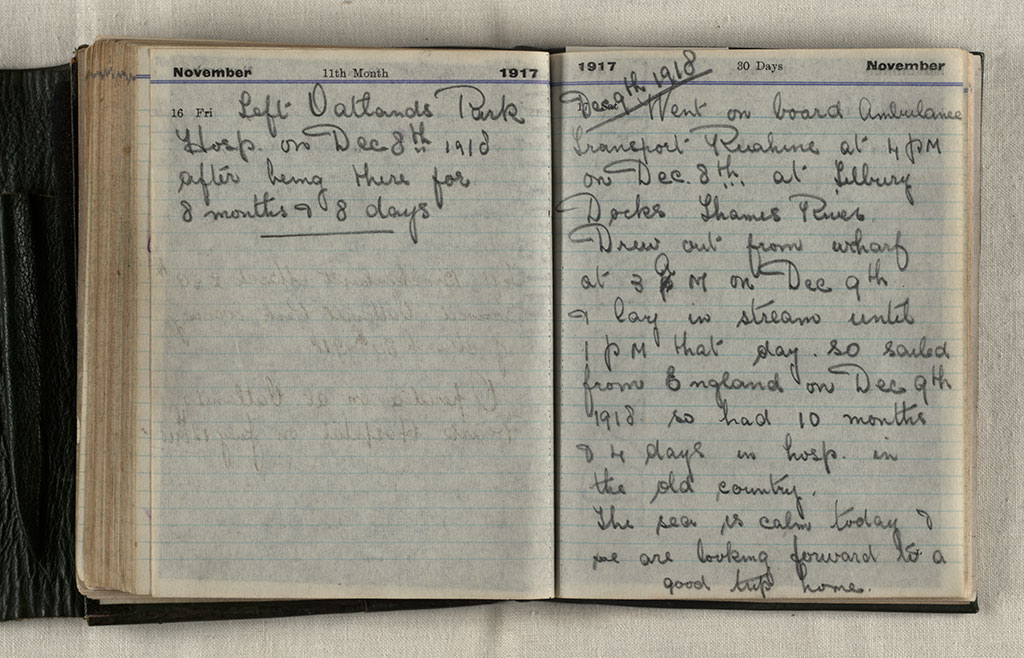 Dec 9th 1918
Went on board Ambulance Transport Ruahine at 4 pm on Dec 8th. at Lilbury Docks Thames River.
Drew out from wharf at 3 am on Dec 9th & lay in stream until 1 pm that day. so sailed from England on Dec 9th 1918 so had 10 months & 4 days in hosp. in the old country.
The sea is calm today & we are looking forward to a good trip home

Edward Aubrey spent his remaining service in medical care in Egypt and then Britain ("10 months & 4 days in hosp. in the old country). When he arrived back home in New Zealand, he returned to farming in the Omarama area on land won in a ballot as part of a Returned Soldiers' initiative. 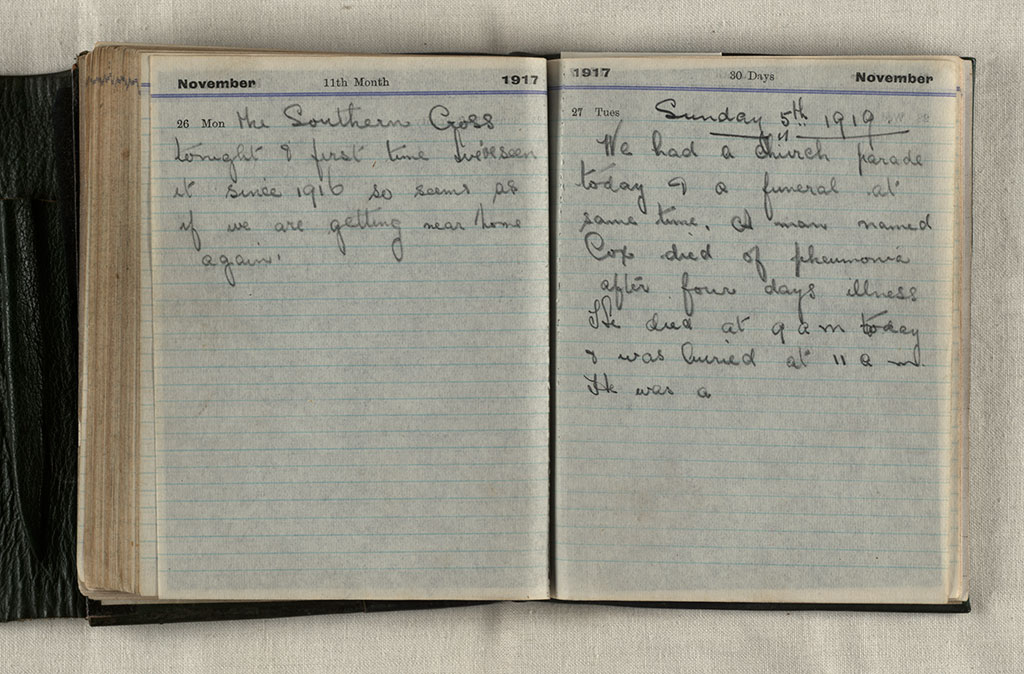 the Southern Cross tonight & first time I've seen it since 1916 so seems as if we are getting near home again.

Sunday 5th 1919
We had a church parade today & a funeral at same time. A man named Cox died of pneumonia after four days illness
He died at 9 am today & was buried at 11 am.
He was a

I spotted a familiar address in his diary, Dover Street in St Albans - probably the address of one of his mates, and did a wee delve, and wonder if this is his wedding announcement in the Otago Daily Times (12 May 1920). Edward died in 1963.

Find out more about the First World War: