Gail Honeyman's brilliant debut novel features one of the most quirky and utterly original heroines you are likely to meet - Eleanor Oliphant, a quiet, socially inept office worker who 'survives' each day. 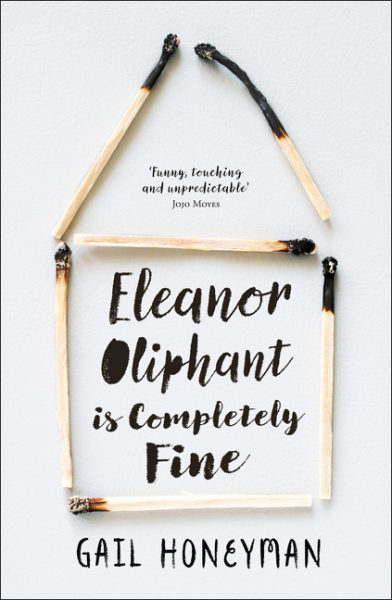 Unpitying and unambitious, Eleanor struggles with a past she can hardly bear to remember and which readers come to learn more of as the story unfolds. Eleanor is 'completely fine' simply because she has to be. She lives by the same carefully scheduled timetable each week of lunchtime meal deals, visits to the grocer for two bottles of vodka, and Wednesday talks with her vindictive 'mummy' until, one day, she meets Raymond, a clumsy, 'unhygenic' IT man from work. When the two rescue an elderly man who has collapsed on the side walk, an unlikely friendship begins to form between them, the type of friendship capable of showing Eleanor it is never too late to reclaim your life and allow yourself to be happy again.

Simultaneously, Eleanor finds 'the love of her life', an arrogant rock star who she concedes she hasn't met just yet, leading to some hilarious 'encounters'. There is a great passage where Eleanor glimpses him in Tesco's and feels she must give him the benefit of her shopping wisdom via her sole means of communication, Twitter:

@eloliph
A Tesco Club Card is a thing of beauty and a joy forever. You should DEFINITELY sign up for one. A concerned friend xx

As ever, Eleanor remains touchingly oblivious. She is brutally honest herself, 'helpfully' telling people things they should not be doing and becoming stunned by 'how rude' they can be when they do not respond. She has lacked social contact for so long, that lack of knowledge rather than rudeness seems to be the cause of her faux pas.

Gail Honeyman has created a very remarkable character in Eleanor Oliphant. I loved the sensitivity with which Honeyman handled her past. It is impossible not to be moved by Eleanor's observation that:

"When you read about 'monsters, house hold names... you forget they had families. They don't just spring from nowhere. You never think about the people that are left behind to deal with the aftermath of it all"

Or by moments such as when Eleanor, moved to tears, thanks Laura the hairdresser for making her 'shiny'. Perhaps the part I loved most about this book though was the sheer warmth and ultimately, hope in Eleanor's story. Her story is full of touching as well as hillarious moments which give a huge lift to the otherwise very distressing theme of crippling loneliness. There is a lovely scene where Raymond brings the convalescing Eleanor a Spongebob helium balloon:

"He passes me the ribbon, and the balloon soared towards my low ceiling, then bobbed against it as though it was trying to escape.
'What is it supposed to be?" I said. "Is it cheese?" I had never been given a helium balloon before, and certainly not one this odd looking.
"It's Spongebob, Eleanor," he said, speaking very slowly and clearly as though I were some sort of idiot. "Spongebob Squarepants?"
A semi-human bath sponge with protruding front teeth! On sale as if it were something unremarkable! For my entire life, people have said that I'm strange, but really, when I see things like this, I realize that I'm actually relatively normal."

I haven't fallen in love so much with both a book and its narrator for a long time and happily give this brilliant novel a ten out of ten. If you're looking for a witty, sensitive, uplifting read which perfectly captures the best and worst that life can offer, this wonderful book is a perfect choice for you.