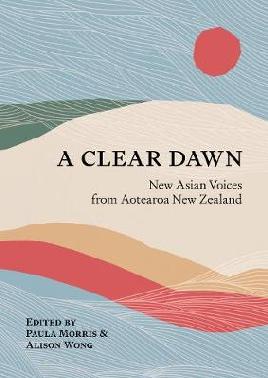 According to the findings of the 2018 census, "the Asian ethnic group (707,598) remained the third largest, with 15.1 percent of the population identifying with at least one Asian ethnicity". The newly-published book A Clear Dawn: New Asian Voices from Aotearoa New Zealand highlights the diverse voices of our emerging Asian writers.

This book is the first anthology of Asian New Zealand creative writing edited by Paula Morris and Alison Wong. The collaboration between Paula and Alison is constructive. This achievement is not only attributed to their cultural identities of tangata whenua and tauiwi, but also related to their experiences and previous works. As a prolific writer with a Māori tribal affiliation, Paula is well-known for her international teaching experience and literary work. Alison, as a New Zealand poet and novelist of Chinese heritage, provides a perspective from Asian New Zealanders, which has been prevalent in her previous work. With their joint efforts, this anthology collects the work of seventy-five emerging Asian New Zealand writers in the forms of poetry, fiction, and creative nonfiction.

The diversity and novelty of the anthology is eye-opening. The title of "A Clear Dawn" is drawn from a Chinese Tang-dynasty poem by Li Bai. According to Paula and Alison, the image of Spring dawn presented in the poem informs them of the spirit of discovery and inclusion. The mindset of inclusion enables them to pay attention to creative work around diverse topics. The topics they include are related to identity, religion, politics, culture, family and intergenerational relationships, cross-cultural perceptions and interactions, friendships, daily encounters, memories, imagination, and more. With the principle of discovery, they explore the literature work in which Asian writers are underrepresented. As a result, this masterpiece contains the creative work of Asian writers, many of whom are being published for the first time. The work of these emerging writers definitely adds to New Zealand literature.

The individual pieces of the anthology are impressive. The new dawn of writers are descendants of Asian diasporas. However, their work does not merely focus on narrating shared immigration histories and maintaining collective consciousness. Instead, these writers reimagine and reconstruct a diasporic identity with not only their geographic origin but also multiple national and ethnic affiliations. Their voices are unique, insightful, and profound. For example, Nina Mingya Powles shows her individual feeling of retracing the Chinese language as part of her identity in her poems of "Mother Tongue" and "Girl warrior, or: Watching Mulan in Chinese with English subtitles". Rose Lu's creative nonfiction "from 穷人店、富人店" challenges English grammatical conventions with an insightful multilingual perspective. Gemishka Chetty's poem "Two colours" and Sherry Zhang's poem "I cannot write a poem about China" express how constructing their identity in a host country is conditioned with complex social relations and politics.

The anthology is compelling reading as a whole - and in its parts. Paula and Alison highlight the notion of "opening" in this anthology. It reads, "Our work here is a karanga that opens up a space for other voices so that many different currents can flow into one meeting place". The selected work of the anthology also opens up a space for readers' interpretation and reflection.