Friday 22 February 2019 is the eighth anniversary of the 2011 quake. There are events to commemorate those we lost; and places where the community can come together to reflect and remember.

The eighth anniversary of the February 2011 quake that killed 185 people will be marked with a civic memorial service. The service will take place on the north bank of Oi Manawa – the Canterbury Earthquake National Memorial – at 12.30pm on Friday, 22 February. All are welcome to attend. The service has been developed in collaboration with the Quake Families Trust. 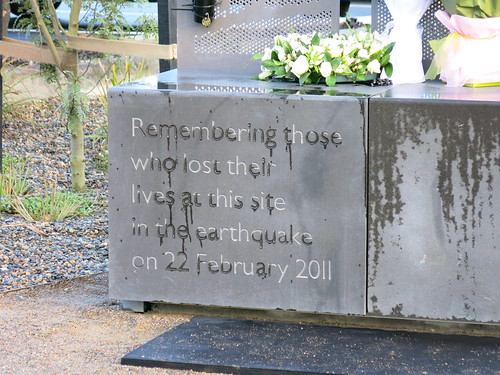 The Avon Loop Planning Association invites you to gather at The Bricks, corner of Barbadoes Street and Oxford Terrace, for a low-key earthquake commemoration on Friday 22 February from 12.30pm. Please bring a flower to be cast into the river. This is an opportunity to remember and reconnect with your community. Everyone is welcome to refreshments afterwards at the Avon Loop Community Cottage.

The Memorial on the former CTV site on the corner of Madras and Cashel Streets opened as a space for reflection and commemoration on 22 February 2018. 115 people lost their lives in the Canterbury Television (CTV) building.

Some people find this a place of contemplation and remembrance. The 185 chairs installation was created by artist Peter Majendie and is currently located on the corner of Madras and Cashel Streets.

Earthquakes and Butterflies (Friday 22 February 6pm and 8.30pm at the Christchurch Transitional Cathedral)

EARTHQUAKES & BUTTERFLIES is being reworked for the 8th anniversary of the February 22nd Christchurch 2011 earthquakes. Last year there were 7 performances of a physical theatre version of Kathleen Gallagher's novel, using the style of object metaphor where cardboard tubes echoing the materials of the Christchurch Transitional Cathedral suggested the earthquake landscape. This year there will be two performances on the day of the anniversary.  This year's production has been edited and directed by Martin Howells and the physical score is being reworked with Christchurch choreographer Fleur de Thier.  It is a different take on the work which builds on last year's presentation.

There will be a Fine Art exhibition to coincide with the Earthquakes and Butterflies performance. Artists Jane Zusters, opens a new window, Michael Armstrong , opens a new windowand Rua Pick, opens a new window will be displaying selected pieces by invitation at the Cardboard Cathedral. The artworks will be available to view during hours when the cathedral is open to the public.