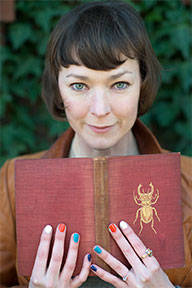 M.G. Leonard is the author of the new 'quirky, humorous adventure' for kids, Beetle Boy. I blogged about Beetle Boy recently and my newfound interest in beetles from reading this fantastic book. Beetle Boy is one of those books that I can't stop thinking about. I miss the characters and I really need to know what happens next.

I had some questions that I wanted to ask M.G. Leonard and she has very kindly answered them for me. Read on to find out what inspired her to write Beetle Boy, her favourite beetle, which beetle ability she would love to have, and why she loves writing for young people and the young at heart.

What inspired you to write Beetle Boy?

Growing up I was frightened of insects, and consequentially never knew much about them. One day I was trying to write a story and I wanted to describe creepy crawlies accurately, so I typed the word ‘beetle’ into Wikipedia, and was flabbergasted by what I discovered. I didn’t know that beetles flew, I didn’t know how good they were for the environment, how beautiful they can be, how they come in all shapes and sizes, and that they are actually the most successful creatures on the planet. All these revelations really sparked my imagination, and that was the inspiration for Beetle Boy.

What three words would you use to describe your story?

The first word would be ‘adventure’; the second would be ‘humorous’ and the third - ‘quirky’ – a quirky, humorous adventure!

What is your favourite type of beetle?

It’s hard to have a favourite beetle when there are over 350,000 known species. I have a very big soft spot for the Rhinoceros Beetle, because it’s such a cool, awesome friendly, wonderful creature. However, if I was to choose a pet beetle, I think I would pick a Rainbow Stag Beetle. Rainbow Stag Beetles are a perfect combination of beautiful and impressively strong.

If you could have one beetle-ability, what would you choose?

I think I would probably pick the ability of a Firefly. I would like to have a bioluminescence body that I could switch on and off, and control and flicker, and flash – I think that would be pretty cool, especially at a party!

Lucretia Cutter is one of the best, most evil villains I’ve come across in a children’s book – who is your favourite fictional villain?

There are so many great villains, but I have always been in awe of Jadis the White Witch from The Chronicles of Narnia by C.S Lewis. She is mesmerizing, fascinating and utterly terrifying.

I love the names of your characters. Craven and Dankish are great henchmen names. How do you cone up with character names?

There are lots of different ways I come up with character names. Whenever I’m passing through a graveyard I write down any unusual names that suggest a character to me. Novak is named after an Alexander McQueen handbag, which was named after Kim Novak the actress from The Birds. Virginia was named after Virginia Woolf, and her surname is Wallace, after Alfred Russell Wallace the celebrated British Naturalist. Bertolt is named after Bertolt Brecht, one of my favourite playwrights, and Darkus is named after the civil liberties campaigner and broadcaster Darcus Howe. I chose his surname ‘Cuttle’ because ‘Darkus’ and ‘Cuttle’ together, ‘Darkus Cuttle’, sounds like a beetle’s movement. Craven and Dankish are words that suggest villainous behavior; dark, maleficent and generally bad news!

What is the best part about writing for young people and the young at heart?

The best bit about writing is when I’m writing a scene that is particularly funny and I know it will make the reader laugh, or I’m describing something that they have never imagined before, or I’m taking them from something familiar into something completely new, or I’m making them catch their breath – really, the whole process of writing is pleasurable. Even though your reader isn’t present when you write, they are always in your mind, and everything you do is for them. The best part about writing Beetle Boy, has been young people’s responses to the story, and their newfound interest and passion for entomology and the natural world.

When you are not writing, what do you enjoy doing?

I love spending time with my family. I’m really into watching great films, reading books, sewing, walking along the seafront and gardening. But at the moment, I’m spending most of my time writing.

Thanks for joining us M.G.!  Now everyone needs to rush to the library and grab a copy of Beetle Boy. Check out my previous blog post, Beetle Boy - A mystery to really bug you, to read all about Beetle Boy and find some great books and eResources about beetles.