Last Wednesday evening, I took my seat at The Piano amongst a buzzing crowd of fellow guests ready to consider the fact of fiction, and the fiction of fact. We had assembled for the panel discussion ‘What A Fool Honesty Is!’ presented by WORD Christchurch in association with The Christchurch Arts Festival.

Rachael King, literary director of WORD Christchurch, opened the evening's proceedings with some words about the theme. Shakespeare’s ‘A Winter’s Tale’ formed the basis for many events in the Arts Festival, and in looking at that work King said she had been inspired by Autolycus, the conman from the play, who uttered ‘what a fool honesty is!’, a provocation - is it, though? 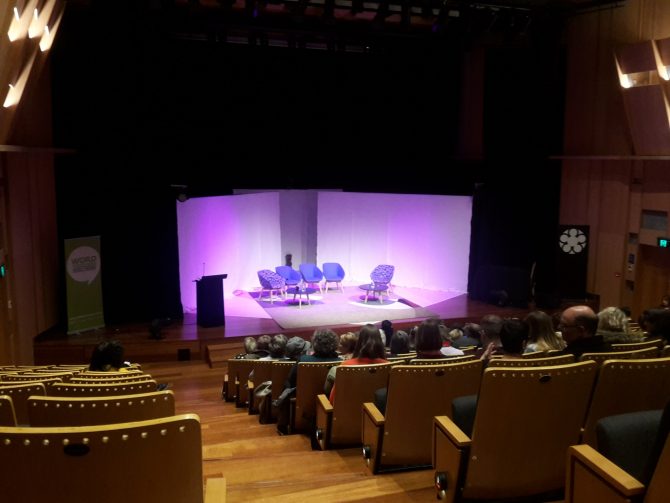 There’s a topicality about the question of the nature of truth and lies, as Trump decries much of the fourth estate as ‘fake news’, as lies are perpetuated to maintain the status quo, as honesty gets people into trouble with oppressive governments, and as users of social media users post selfies and poetry #honesty. Each of the panellists brought a distinct perspective and a range of experiences to their reflections on this subject.

First to take the stage was poet and youth advocate Daisy Speaks, opening with a poem. A wonderful speaker, the poem was a captivating introduction to her kōrero, in which she shared her experiences growing up in South Auckland through to tertiary education and being told, time and time again, by various figures in her life ‘you can’t do that’. She spoke of the importance of tuning down such naysayers – those who tell you stories about who you are, with narratives often based on prejudice, bias - which can reduce you. Rather, leading in hope and collective empowerment, and holding space against mana-reducing energy, allows one’s truth to be lived and understood.

After Daisy came the formerly of Christchurch, now Dunedin-based writer Fiona Farrell. She opened – ‘I’m a habitual liar. Small scale, but regular’ to laughs from the audience. After exploring the kinds of white lies that, for many, occur often, she spoke of the Christchurch earthquakes as being a kind of reveal – 'ancient swamps bubbling up through the cracks', forcing us to see ourselves as small, insignificant, fallible, subject to being swept along by the forces of nature. Then she spoke of 15 March, and Jacinda Ardern responding to the tragic events of that day with the oft-repeated phrase ‘This is not us.’

How do we say who we are? Farrell posited there are two ways of approaching this question – through non-fiction, facts, reason - and then through fiction, as a means of imagining, speculating, hypothesizing, and testing the truth. Fiction, she said, is a lie – ‘shadows on the cave wall’ – yet if asked what a time or a place was or is like, Farrell would recommend reading fiction – Witi Ihimaera, Patricia Grace, Katherine Mansfield, Paula Morris, Charlotte Grimshaw. But her tolerance for fiction doesn’t extend to the fictions of the likes of slippery politicians, fraudulent finance companies, breakfast hosts who peddle partisan propaganda, and the vitriol of platforms like Cameron Slater’s Whale Oil blog. Farrell ended by noting that who we are has to include all of the above, and ourselves when ‘we collude through apathy’, yet we are also the other characters – whistleblowers, activists, students – who call out lies when they see it – such people demonstrating that honest is who we can be, who we can aspire to be.

Donna Miles-Mojab, journalist, was next to speak. Growing up in Iran, she was 12 when she learned that honesty is an enemy, a thing that can get you murdered. Under the Islamic Republic’s rule of Iran, liberal families were considered enemies, and so, dishonesty becomes necessary to survival. Harking back to Autolycus, she mentioned 'honest fools' - those that lose their lives by speaking truth to power, by striving for the protection of civil liberties. She also said that we tend to ignore the inequalities and injustices that occur all around us, on a daily basis - by staying silent we maintain the flawed status quo. Miles-Mojab noted that although after the 15 March shooting there was a great deal of tears and sadness, there is a lack of acknowledgement of Islamophobia in New Zealand - that we say 'they are us', and yet look away from injustices happening all around us. She offered as examples that politicians go unchallenged when they promote policies based on fear and othering, and the media continues to negatively portray Muslims. Individualism under neoliberalism encourages a 'big me' approach to life, and yet this ethos fails to recognise that injustices to others affect us all. Miles-Mojab closed with an exhortation to us to not allow hate to fester, and to acknowledge truths - that fascism is on the rise, that climate change is affecting us, that it is time for us to take an honest look at what is going on - and act.

Choreographer Rodney Bell then addressed the audience. He relayed personal anecdotes drawn from his time living on the streets of Los Angeles, where he had moved after gaining a contract with a prestigious dance company. It is these experiences upon which his multimedia perfomance piece 'Meremere' is based. He observed the necessity of honesty in telling that story, and in developing it into 'Meremere', relaying his experience in Alameda Prison during his time in Los Angeles, the difficulties encountered there, and how the truth became something that had to be hidden from the dance company. He spoke with an openness and generosity in his autobiographical reflections on truth and lies.

To laughs, playwright Victor Rodger took the stage, by asking the audience 'does my bum look big in this?' He went to elucidate his personal relationship to honesty, reflecting on times when he was honest, but with consequences - telling the director of a play what he really thought as a result of being 'hangry' (to the director's chagrin). As a young man, he wrote writing a letter to a friend he felt had betrayed him, though so doing irrevocably changing their friendship, and writing another letter that made the recipient truly loathe him. Rodger then talked about Christchurch - the city upon which his play 'Christchurch Almighty' is based, a place he had a hard time growing up in. He said that the honest truth of Christchurch is that the 'Ballantynes ethos persists' - that people are all about the rebuild of the central city, with its shiny new buildings, and yet, in the east, Porritt Park has been left in a state of terrible disrepair, overlooked by many as unimportant. Such abandonment, he said, wouldn't happen in the western suburbs. He then recalled as a young man attending a ball at Rangi Ruru, and encountering guests dressed as the KKK and white power gang members. Victor Rodger concluded by questioning the hashtag popularised in the wake of the March 15 tragedy - #thisisnotus? His reaction - #bullsh**.

And so ended the evening, to a standing ovation from the audience. The presentations were each powerful and thought-provoking, reflecting both the need to explore one's own truths to live fully and to stand up and reject apathy as injustices, lies, oppression and inequality play out. Time to look truth in the face, unflinching, and take action.