The Māori New Year has always been celebrated with the rise of the star cluster Matariki. It marks the beginning of the Aotearoa/Pacific New Year according to the lunar calendar. In 2023, the stars set on 13 Haratua / May, and rise 10 to 13 Takuru / July. The public holiday of Matariki is on Friday 14 July in 2023.

Explore the traditions and importance of Matariki with information about resources, crafts, and ways to celebrate with Christchurch City Libraries. 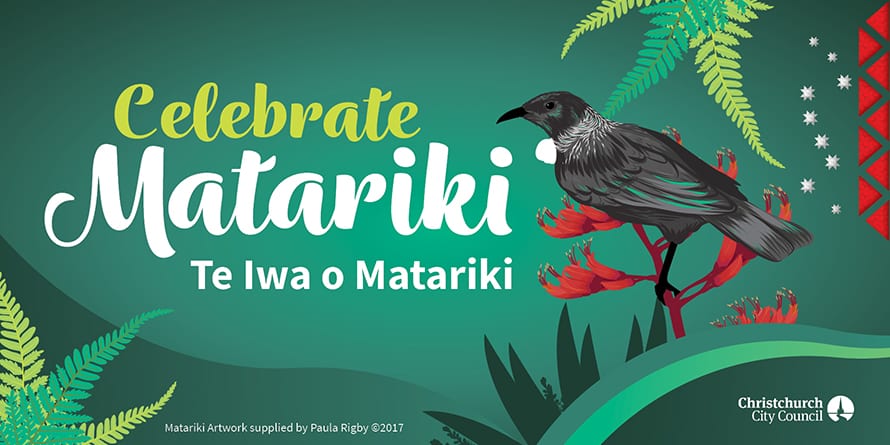 The full name of Matariki is “Ngā mata a te ariki Tawhirimātea” – the eyes of the Ariki Tāwhirimātea. This star cluster known as by many names throughout the world. Its Greek name is Pleiades. It is also known in western astronomy as Messier 45. In Hawai’i it is called “Makali’l – eyes of the king”, in Denmark it is known as “the evening hen”, and in South Africa its name means “the stars of rain”. It is known as Subaru in Japan, which is also a name of a make of car which has a group of stars as its logo.

Stars that reappear every year

Matariki is visible in the sky almost all year. It moves through the sky until the beginning of the cold months, when it disappears for approximately 28 days. Upon its reappearance again on the horizon, the New Year begins and so too the journey of Matariki for another year. 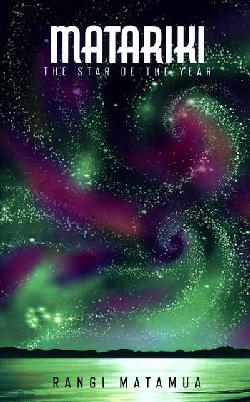 The star cluster of Matariki has often been referred to as a grouping of seven stars. In Greek myth they were the seven daughters of Pleione and Altas, also known as "the seven sisters". However Pleione and Atlas themselves form part of the cluster bringing the number of visible stars, even in the Greek tradition, up to nine.

This is reflected in Māori tradition. Associate Professor, Dr Rangi Matamua is a leading Māori astronomer who has spent over 20 years researching indigenous astronomy. His research shows there are nine stars that make up the star cluster of Matariki.

Contrary to popular belief, there are nine stars in the constellation of Matariki, rather than seven. They all hold dominion over particular areas of our environment as seen from a Māori world view. They are; Matariki, Pōhutukawa, Waitī, Waitā, Waipuna-ā-rangi, Tupuānuku, Tupuārangi, Ururangi, and Hiwa-i-te-rangi. Traditionally, our ancestors did not just look at the constellation as a whole, but rather viewed each star individually, gaining an insight into the year ahead. ("Te Iwa o Matariki" Mana, May 2016)

Listen to Justice, Mangaia, and Maatakiwi talk about Matariki 2022.

Our theme for Matariki 2022 therefore was:

Find out all about the traditions of Māori New Year on our Matariki for Kids page.

Learn about the stars of Matariki with this downloadable folded paper star sheet (1MB PDF).

Instructions and video on how to make a woven star from harakeke.
cclstaff 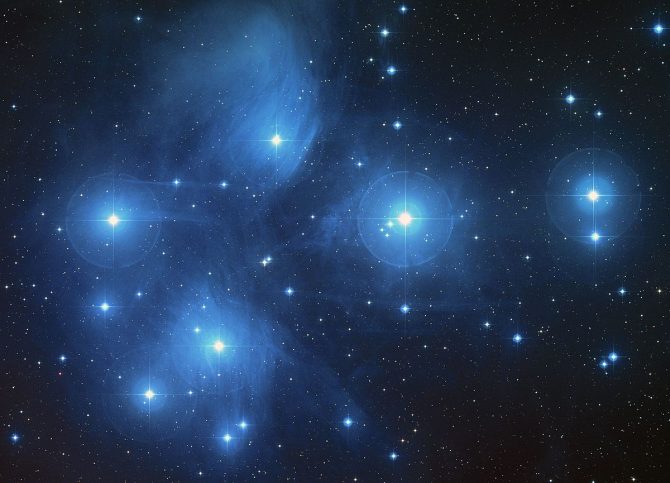 Matariki tribal celebrations are held at different times by different iwi (tribes). For some, feasts are held when it is first seen. For others, it is the full moon after it rises that is celebrated and for others, celebrations are centred on the dawn of the next new moon. Each winter the stars of Matariki and Puanga (Rigel) signal the end of one year and the beginning of the next. Matariki occurs on or near the winter solstice.

Oral traditions are a way of preserving in stories the knowledge of deeds of ancestors, events and places of significance. These stories were expressed in pūrākau and pakiwaitara (different forms of storytelling), song and even mahi whai (Māori string patterns). Mahi whai were used to create patterns and constellations used for navigation. Many stories refer to certain stars as navigational tools and/or tohu (omens).

The stars and their appearance in the night sky were also used to predict the outcome of coming events. Matariki is one such cluster of stars that is used to foretell the fortunes of the coming year. In some areas, clear bright stars signalled a warm and productive seasons ahead, whereas hazy or shimmering clusters meant harder times were ahead. Whānau would prepare themselves accordingly. Traditionally such tohu (omen) related to mahika (mahinga) kai (traditional food sources) such as kaimoana or birds. Such predictions could be confirmed by the similar appearance of other stars such as Puanga and Takurua.

There are many stories associated with Matariki, the most common is the mother and her six or seven daughters. Every iwi has their own beliefs and traditions that pertain to them. In Te Waipounamu (the South Island), Puaka (Puanga) is the first star of the Māori New Year. Its appearance denotes the fortunes of the coming year. Kāi Tahu, particularly those on Te Pātaka o Rakaihautū (the Banks Peninsula) knew within three days from the first appearance of Puaka that Matariki would rise. From the first physical appearance of Matariki, mātanga (experts) confirm the predictions made with the first appearance of Puaka.

Matariki is a time of remembering those who have passed, giving thanks for the blessings we have, preparing for the year ahead and for higher learning. Traditionally in Te Waipounamu (South Island), particularly on Te Pātaka a Rakaihautū (Banks Peninsula) the cold months were the time of the Whare Wānaka (Wānanga) – schools of higher learning.

When the star Uruao appeared over a certain mountain in the early evening sky, it signalled the opening of the Whare Wānaka. The Whare Wānaka were numerous and covered many topics from whakapapa (genealogy) to karakia (ritual chant / a form of prayer). Each Whare Wānaka focused on a specific topic and only selected individuals would attend.

Henare Rakiihia Tau (known to many as Rakihiia or Rik Tau) was the Upoko Rūnaka of Ngāi Tūāhuriri for nearly 20 years at the time of his passing in 2014. He was an experienced hunter and gatherer of mahika kai (customary harvesting of natural food resources). Learning from his old people, he had gathered mahika kai for years in traditional areas from the Moutere Tītī (the Muttonbird Islands in the far South) to the Rakahuri (Ashely River) and everywhere in between.

Prior to his passing Rakiihia gifted this feature on Matariki to the Christchurch City Libraries. He discusses and explains Matariki in terms of what it meant to the life of Ngāi Tahu whānui and puts it in the context of the year-long cycle of mahinga kai — gathering food and the necessities of life.

“What does Matariki mean to you?” - Your poems and stories

We asked for submissions of stories and poems about Matariki. Read what people wrote on Canterbury Stories, our digital heritage repository. 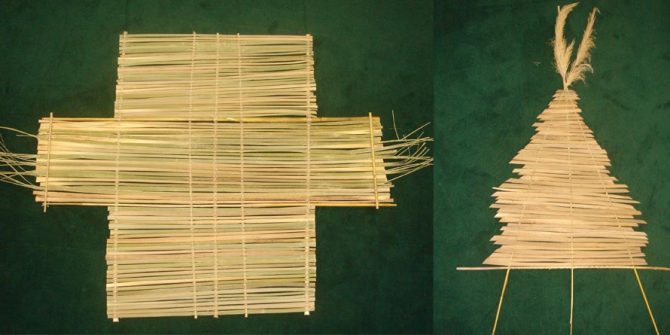 Kites were seen as connectors between heaven and earth, and were often flown at this event, especially on the first day of the New Year.

Preparing a meal for friends and whānau is traditional at Matariki. It is a time when Pātaka (food stores) were full of mahika kai— kumara and other root foods had been gathered, fish were migrating so catches were good, and other foods such as eel (tuna) and birds had been preserved.

A focus on our whakapapa during Matariki gives us a better understanding of who we are, where we have come from and where we are going. It is also a great way to bring whānau together to share stories and knowledge. Some suggested activities during Matariki are:

Other cultures also recognise the seasonal role of the Matariki star cluster and have interesting traditions about it.

Learning resource [2MB PDF]
Christchurch City Libraries has created a Matariki learning resource pack for teachers of pupils in Years 1 to 8. Full of practical examples and ideas, this resource can be used to incorporate Matariki into subjects such as art, dance, English, science, social science and social studies.

Te Whata Raki
Come and discover the new world inside Te Whata Raki. Explore our new online world with your guide, Whetu Marama. Learn about some traditional stories, told through waiata, pictures and other web resources before trying out the quiz.