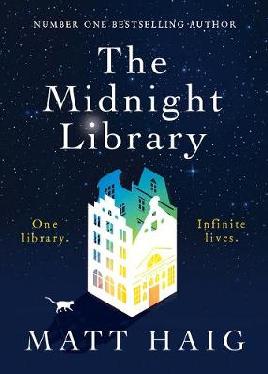 It's not often you read a book where you know straight off that the main character is going to die. But that's what we're told in the opening lines of The Midnight Library by Matt Haig.

Nora Seed's life started to fall apart in high school, and by the age of 35 she's lost her parents, her dreams, her job, her cat, and her will to live. When her regrets become so crippling that she decides to end her life, Nora finds herself not dead, but instead the only visitor in a vast library full of endless shelves of green books. Each book represents a possible life she could be living. With the help of the librarian, Mrs Elm, Nora tries to undo her regrets and find the perfect life.

We follow along with Nora as she moves from that dark place where she believes death is the only answer, towards a place of acceptance. As she tries to expunge her regrets by living alternate paths, she realises that she is not the cause of every bad thing that has happened in her life. That sometimes stuff just happens, we can't change it, and that is OK. That life doesn't have to be perfect to be good.

As Nora lives through multiple "what if?" lives, I enjoyed seeing her learn that she had been right to give up on dreams that were never hers to begin with. Had she dreamed of going to the Olympics, or was that really her father's dream? Had she really wanted to own that pub in the country with the fiancé she ran out on two days before the wedding, or was it his dream?

I also enjoyed the little bits of library humour. Imagine a library where every single books is green, but the librarian is so amazing she knows the book you want is on the eleventh row, third shelf from the bottom--that's a librarian extraordinaire right there!!

About half way through, I got a little annoyed that Nora met someone else who could explore their other possible lives. It reminded me instantly, not only of the evil leaper in Quantum Leap, but also of Hendrich, a character in Matt Haig's earlier book How to Stop Time. I was worried that the story was becoming hackneyed, overdone. But thankfully that character made only brief appearances, and Nora's story wended it's quirky way on, through her regrets and dreams and infinite versions of herself.

Matt Haig is very open about his own struggle with anxiety and depression, including his contemplation of suicide. He has also written Reasons to Stay Alive, a non-fiction book prompted by his own experiences.

On the face of it, The Midnight Library could be a rather depressing read. But I found it thought provoking, quirky, and ultimately life-affirming. If you have ever wondered what might have been if you'd just stuck with it, or said yes to that date, that job, that adventure, I'm sure you will enjoy this book!