International Women’s Day (IWD) is celebrated on 8 March each year. This global day connects women around the world and aims to inspire them to achieve their full potential. The day celebrates the collective power of women past, present and future. This page explores library resources looking at women’s issues — now and then.

WORD Christchurch and UC College of Arts presented 'How To Be a Feminist', a live broadcast from the Sydney Opera House’s All About Women festival on International Women’s Day, Sunday 8 March.

The panel includes Germaine Greer, Roxane Gay, Anita Sarkeesian, Tara Moss, Clementine Ford and Celeste Liddle. The broadcast will be followed by a live panel responding to the issues raised in the discussion and putting them into a local context.

Over one hundred years of IWD

The first International Women’s Day was celebrated in Europe in 1911 on 19 March. More than one million men and women attended rallies to campaign for women’s rights and to end discrimination.

The United States already had a National Women’s Day, started in 1909 by the Socialist Party. In 1911 a fire in New York killed more than 140 working women, drawing further attention to poor working conditions and legislation. The pursuit of workers’ rights and the right for women to vote and to hold public office became the focus for International Women’s Day causes.

These days International Women’s Day celebrates the achievements of women, but recognises the continuing disparity between women’s and men’s income levels, and the need for more women to participate in both political and economic spheres.

The United Nations first celebrated IWD in 1975, during International Women’s Year. IWD is a public holiday in a number of countries, including China and Russia.

The following subject headings link to titles about the history of women and their rights:

Contemporary Women’s Issues
This resource offers full-text articles that bring together content from mainstream magazines, “grey” literature, and the alternative press — with a focus on the critical issues and events that influence women’s lives in more than 190 countries.

Opposing Viewpoints in Context
This resource offers full-text articles from many perspectives on major contentious social, political, and technological issues. Some topics that particularly affect women are the gender gap, women’s health, and women’s rights.

Women and the vote in New Zealand 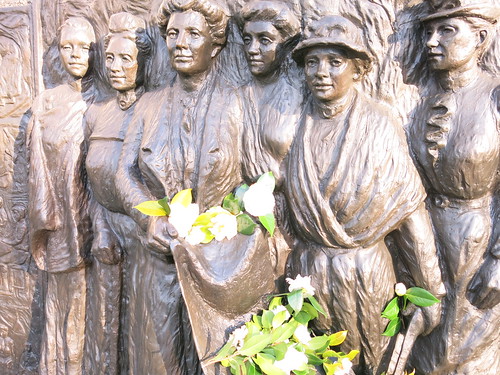 New Zealand was the first self-governing country in the world to grant the vote to all adult women. Search the library catalogue for books on suffragists and women’s suffrage.

Women’s Suffrage Petition
The petition was organised in 1893, and was described by Kate Sheppard as "a monster petition" demanding the right for women to vote. A digital image of the actual petition held at National Archives. Search for the names of women who signed the petition at New Zealand History Online.

Women’s Suffrage Movement
Article from 1966 An Encyclopaedia of New Zealand, edited by A. H. McLintock.

Christchurch’s Kate Sheppard was the leader and main figurehead of the suffragist movement in New Zealand.