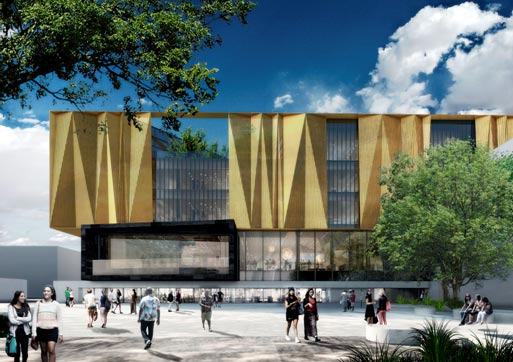 The design of Christchurch’s New Central Library in Cathedral Square was inspired by the Canterbury landscape and feedback from the public on what they wanted in the new building.

Christchurch City Council today agreed to call for expressions of interest from contractors to build a new library of about 9,850 m2 at a total cost of up to $85 million.

The Council noted that its current contribution to the project is $75 million and it asked that a funding update on the project in September include information on a philanthropic contribution of $10 million as outlined in the Cost Sharing Agreement with the Crown.

Deputy Mayor Vicki Buck says she is very pleased that the library has taken a major step forward. “We want to create an attractive civic building that will draw people into the square and help revitalise the central city. The facade echoes the warm colours and shadows of the Port Hills and the triangular leaves of the native harakeke flax that once grew in swamps around the site.

“This will be a great place for people of all ages to read, try new technology and socialise, and the lay out is flexible enough to adapt to the rapidly changing needs of the community.”

The New Central Library is expected to open in 2018. It replaces the old central library in Gloucester Street which was damaged in the earthquakes and demolished to make way for the new convention centre as part of the Christchurch Central Recovery Plan.

Along with digital, specialist and print collections the Central Library will have a cafe, 200-seat community arena, exhibition space, outdoor terraces, and areas for families, children and youth.

Libraries and Information Manager Carolyn Robertson says the New Central Library facilities and lay out is based on 2,400 ideas from residents collected during last year’s Your Library, Your Voice campaign.

“Through clever design we’ll provide the mix of family-friendly areas and quiet places people told us they wanted. The New Central Library will be able to offer programmes that were never possible in our old building. We’ll have activity rooms for things like craft sessions, as well as a film and editing unit and a music studio. I’m looking forward to holding author talks in the community arena.”

“The ground floor is a public space that’s an extension of Cathedral Square. We want people to feel like they belong here and, once they’re inside, we want to make access to information as easy as possible.”