Christchurch City Libraries celebrated Matariki 2005 by weaving a whāriki using harakeke (New Zealand Flax). The weaving took place in eight libraries around Christchurch during June. Simon Rutherford was in the libraries encouraging the public to work on the whāriki with him. He had been weaving since learning at the feet of Cath Brown, one of the key figures in raranga.

The finished whāriki was a koha from the libraries and people who work in and use the libraries of Otautahi Christchurch to the Parklands / Waitikiri Library that opened Saturday 6 August 2005. 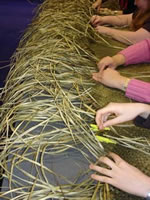