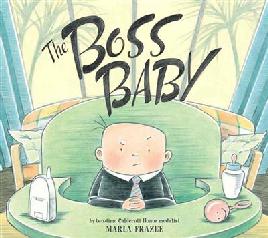 The film Boss Baby (2017) is loosely based on the 2010 book by author and illustrator Marla Frazee. Many a parent has thought that their little ones seem to rule the roost ... sometimes they are downright tyrannical with a temper tantrum or two. Boss Baby is a delightful metaphor. Here, parents are the overworked staff of Boss Baby, put upon by his demands. Coincidentally topical, Boss Baby may remind you of a certain world leader making headlines for similar behaviour.

Starring the Boss Baby as Himself!

The Boss Baby (2010)
From the moment he arrives, it is obvious that the new baby is boss and he gets whatever he wants, from drinks made-to-order around the clock to his executive (play) gym. He makes demands. Many, many demands. And he was quite particular. If things weren't to his immediate satisfaction, he had a fit. He didn't say a single word that made any sense at all but that didn't stop him. He was born leader. 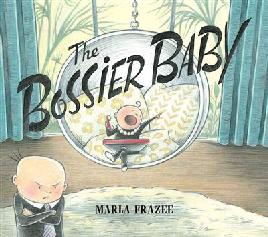 The Bossier Baby (2016)
Boss Baby used to be in charge of his family, but that was before he got an even bossier baby sister. She demoted him and made herself CEO and set about restructuring the organisation (aka the family). She had a full-time social media team and a private limo (cue pram envy). Boss Baby was sidelined until they started working cooperatively to rule their workers (aka parents).

Introducing the Bossier Baby as Herself!

The voice of Boss Baby in the film is actor Alec Baldwin who has been doing impersonations of American president Donald Trump on Saturday Night Live.