When I saw that the grand opening involved sled dogs pulling a tram, I decided this was a must for the Young Lad, so despite the familiar protest that 9:30 was too early for anything on a Saturday, I took him along – leaving Miss Missy and Mr K to enjoy their lazy Saturday morning.

I thought we’d be there for half an hour tops, but little did I know what fun awaited us at the IceFest Hub! First the excitement of seeing the tram being pulled by the team of dogs. Then the wonder as a block of ice was slowly turned into a beautiful sculpture of an emperor penguin feeding its young (not a kangaroo as the Young Lad suggested). 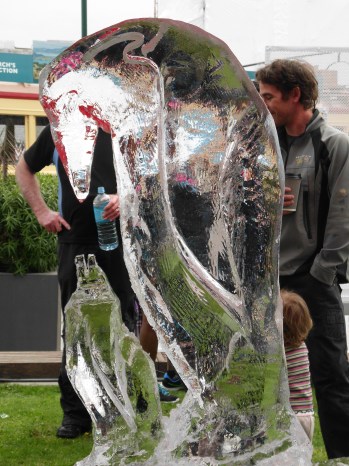 Well, the wonder was perhaps more on my side: while I enjoyed being dusted with snow, Edward Scissorhands style, and watching the sculpture slowly taking shape, the Young Lad joined the general hilarity of kicking chunks of ice around with the other children.

We then listened in as the guys at Scott Base were asked about snotcicles and what happens to the poop (it is frozen and sent to New Zealand for processing — who knew?!), topics sure to delight the boys in the audience.

IceFest is on until 12 October and you’re sure to find something to interest you, from the serious to the hilarious. There will be experts talking about climate change, movies and clowns for the kids, and, if snotcicles are your thing, there are plenty more opportunities to talk to Scott Base.