We have had so many talented people in the AV Studio at Tūranga singing all sorts and styles of music. Something we see a lot is that AV studio users are singing or rapping really well but that they don't know how to complete the song by mixing it.

Audio mixing is the process by which multiple sounds are combined into one stereo track. In the process, a source's volume level, frequency content, dynamics, and panoramic position (panning) are manipulated and or enhanced. Effects such as reverberation and echo may be added. This practical, aesthetic, or otherwise creative treatment is done in order to produce a finished version that is appealing to listeners.

The most commonly used effects in mixing are equalization, compression and reverb.

Equalization is the process of adjusting the balance between frequency components within an electronic signal. EQ strengthen (boost) or weaken (cut) the energy of specific frequency bands.

It is the presence of harmonics within a wave that helps produce the sounds unique timbre. The timbre describes those characteristics of sound which allow the ear to distinguish sounds which have the same fundamental pitch. A harmonic is one of an ascending series of sonic components that sound above the audible fundamental frequency. The higher frequency harmonics that sound above the fundamental make up the harmonic spectrum of the sound. Harmonics can be difficult to perceive distinctly as single components, nevertheless they are there.

Compression is an audio signal processing operation that reduces the volume of loud sounds or amplifies quiet sounds thus reducing an audio signal's dynamic range. A common compressor application is to clamp down on unwanted signal peaks. Extremely dynamic instruments such as drums and vocals benefit greatly from its use. 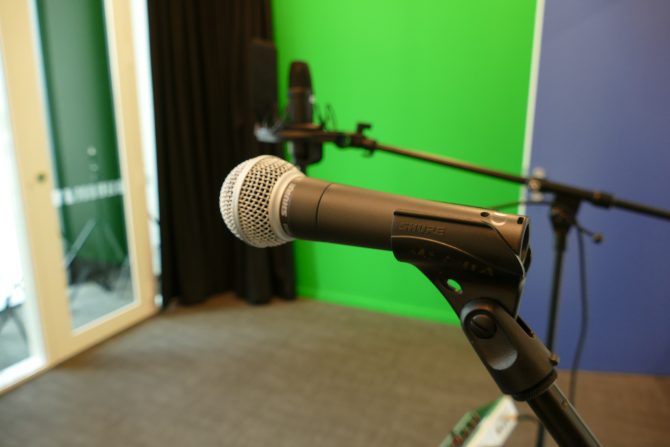 Reverb / Reverberation is created when a sound or signal is reflected causing a large number of reflections to build up and then decay as the sound is absorbed by the surfaces of objects in the space. This is most noticeable when the sound source stops but the reflections continue, decreasing in volume until they reach zero amplitude. Reverberation occurs naturally when a person sings, talks, or plays an instrument acoustically in a hall or performance space with sound-reflective surfaces. The sound of reverberation is often electronically added to the vocals of singers and to musical instruments.

These techniques can be really technical and difficult to learn quickly, so one of the best ways to get to know how to use these effects if by logging onto Lynda.com (free with your library membership) and searching for a vocal mixing video.

Come and try your hand at some mixing techniques in the Studio. Here are the Open Studio times, or alternatively book the AV studio.