So how many people in New Zealand realise that we have two national anthems? I bet not a lot.

There are actually five verses in total. You may have heard part of the third verse in the Royal New Zealand Navy ad.

https://youtu.be/k4rp6Sw5lSw
The words to God Defend New Zealand/Aotearoa were written by Thomas Bracken back in the 1870s. These were then used in a competition to compose a national air (tune or song) for New Zealand, with John Joseph Woods, a teacher from Otago, winning with his now familiar composition. 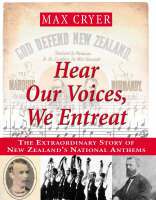 The song's popularity grew throughout the the 19th century and became one of the most popular songs in the 20th century.

It became our national song in 1940, but wasn't adopted as one of our official national anthems until 1977! This was as a result of a petition to parliament the previous year.

Hinewehi Mohi sang God defend New Zealand/Aotearoa in te reo Māori only before the All Blacks versus England match at the 1999 Rugby World Cup, causing a huge public debate in New Zealand.  Wow, I remember that. Some people were outraged and others said "about time".

It just shows you how one person's brave act can change history. Everyone now expects both languages to be sung. As it should be.

Our other national anthem is God Save the Queen. Yes, the British national anthem. I'm sure most New Zealanders wouldn't know the words to this, but as a proud dual citizen - the child of a British parent, and with strong Loyalist Grandparents - I can belt this out. Well, verses 1 & 3, haha.

It is usually only used when Her Majesty The Queen, a member of the Royal Family, or the Governor-General is officially present, or when loyalty to the Crown is emphasised.

The Ministry for Culture & Heritage/Manatū Taonga website has lyrics to both God Defend New Zealand/Aotearoa and God Save the Queen if you're feeling inspired to learn all the verses.

Or you could check out the following: