When it comes to recreational reading - i.e. something light and enjoyable that won't make me think too hard - I have tended to steer clear of romances.

The problem that I have with most romance novels is that they require you to suspend a little too much disbelief, and not just because they seem to be peopled by characters that are stunningly attractive with impressive careers (architects, magazine editors, and surgeons. Oh my!) It's the idea that once the heroine falls into her romantic ideal's arms all her cares and worries are behind her. She's caught the catch. Sealed the deal. It's all smooth sailing from here, folks. Which is really about as realistic as "...and they lived happily ever after".

As a grown-up adult person I sometimes find all the tidy tying up with bows a bit cheesy. 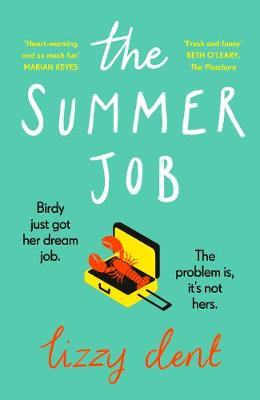 But not every modern romance follows the strict Mills and Boons "it's all about getting the guy at the end" formula and Lizzy Dent's funny romance, The summer job, has all the flirty looks and simmering passions that you'd expect but plenty more to satisfy as well. (Look, when the book cover has glowing quotes from both Marian Keyes and Josie Silver, it's probably a goodun).

Dent (who in a former literary incarnation is YA author Rebecca Denton) has created a fallible but charming character in Elizabeth 'Birdy' Finch, a woman whose life is, frankly, a bit of a shambles. Birdy's life lacks direction, passion, or satisfaction. She bounces between jobs, her "boyfriend" is a drunken lout, and she's estranged from her parents. But her friendship with her best friend Heather has survived it all and the two are fiercely loyal to, and protective of each other.

Heather is everything Birdy is not; posh (an orphan, her parents left her provided for), accomplished (she's a wine expert, or 'sommelier'), and open to the possiblity of love (she's off to Italy for the summer with her latest beau).

Is it any wonder that Birdy would like to be her for a while?

Birdy finds herself out of work and without a place to stay at just the same time that Heather's decided to back out of a 3 month stint as sommelier in a rundown Scottish hotel in favour of jetting off to Italy. Throw in a case of mistaken identity and some egging on from loutish corners and before you know it Birdy is doing the unthinkable and posing as Heather on the west coast of Scotland near the Isle of Skye.

This is one of those stories where you know the protagonist is definitely doing The Wrong Thing but you can't help but root for her. Can she charm her bosses and the customers? Can she fake her way through the wine list? Can she stop flirting with the hot chef?

It's not a case of if she'll be found out but when. But how many people will she manage to take down with her? How can she minimise the fall out? Will Heather's professional reputation remain intact? All these questions give The summer job more than enough tension to keep you reading as Birdy stumbles and bluffs through, and you suspect at every turn that she'll be found out. And there are more surprises in store - there's a twist that she and this reader didn't see coming!

There's also the rural Scottish setting that Birdy increasingly finds herself coming alive in - think rugged wilderness, bracing sea views, rustic country lanes, sunshine and fresh air. Dent does a great job of making Scotland's west coast sound like the perfect place to find yourself but also to find yourself.

So do they live happily ever after?

I don't want to spoil it, but there's more to the ending that just romantic fulfillment. Birdy is a character who, though charming and quick to make a joke, has some issues that can't be fixed by a nice guy with floppy hair and smiling eyes. And the health of her relationship with Heather is as important to her as any romantic one, so a happy ending has to be one for that couple too.

Let's just say it's wrapped up, but not in a bow. Maybe in some tartan furoshiki...

The next draft of #thesummerjob TV script has been submitted. It's getting so much better with each draft!