The venue for this trio of mini lectures was the Rutherford Den's Victorian lecture theatre (continuous wooden seats and desks in tiered rows) and introducing the three women giving what couldn't have been a more diverse range of talks, was Naomi van den Broek.

Cabinet of Curiosities has become a staple of WORD Christchurch festivals, though in the past it's been a lucky dip affair, where you'd book for one of several time slots, pay your money, and take your chances with which of the several lectures on offer you'd get. This time there's one event but as a three course meal - a satisfying variety.

Perhaps it was the classroom arrangement but there was a very excited level of chatter at the beginning of the event with van den Broek having to play the "housekeeping" recording twice to make sure we'd all heard it (thankfully no one was slapped on the hand with a ruler as punishment).

First to the podium was freelance art historian Margaux Warne who gave a delightful talk about that most literary of families, the Brontës. She talked us through the surviving portraits of the writerly sisters Anne, Emily, and Charlotte, one of which was folded up for 50 years and found on top of a wardrobe. She also discussed the art of the Brontës themselves noting that the sisters were limited to working in pencil and watercolour (this considered appropriate for girls) while the sole brother, Branwell, could work in oil. Warne noted that they were all talented artists and that in Anne's novel, The tenant of Wildfell Hall, the protagonist is a woman who paints for a living.

Warne's lecture gave an insight into the life and works of the Brontë sisters via images of the everyday objects they used (a writing slope, a pair of shoes) and documents and artworks they created

Next to speak was writer Pip Adam, not on a topic related to fiction or writing but on her complicated relationship with veganism (and food in general) via the seminal title, Meals without meat by Simon & Alison Holst.

A vegetarian since the age of 13, Adam was quick to let us know that this wasn't a choice she made for political or health reasons but it was more about her unhealthy obsession with calories. She would carry around a little booklet that came with Dolly magazine that listed the calorific content of a range of foods, and referring to it frequently and fervently.

She devoted some time to charting the career of Alison Holst, how off the back of the success of Graham Kerr's 'Galloping Gourmet', she was plucked from obscurity (and the School of Home Science) to host a cooking show aimed at home cooks. Meals without meat, first published in 1990, came about as her university age children had decided to eat vegetarian so Holst teamed up with her son to produce the book. For Adam it would broaden her culinary horizons:

I opened it because I was hungry and was sick of eating toast.

Despite being obsessed with food, Adam could cook almost nothing but the tide turned when she tried making a quiche from the book and it actually tasted good! Adam had us in the palm of her hand as she waxed lyrical about the vegan eating opportunities of 90s Christchurch, with many murmurs of nostalgic approval for the pumpkin and chocolate muffins from the Boulevard Bakehouse, and the pumpkin and peanut butter balls from Mainstreet Cafe. 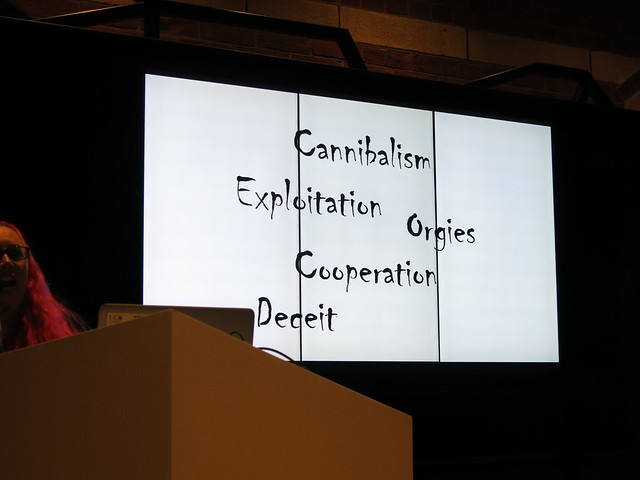 We see cannibalism in glow worms (which are the larval stage of a "glowy spider bug"). Glow worms feed out silken threads (like spiders) but that are sticky. Their glows confuse flying insects looking for a way out of a cave (mimicking daylight), which then fly into the threads and get stuck. The glow worm then pulls up the thread and eats the insect. Glow worms are quite good about spacing themselves out along a cave ceiling because if they get too close their siblings will eat them. So that's where the cannibalism comes in.

Fireflies (which are actually beetles) use particularly flashing patterns to attract a mate. The males fly around flashing away while the female waits in the undergrowth. When she sees a pattern that she likes she copies it and they will mate. Some species sychronise their flashing which can make for a pretty impressive display. But beware, fireflies! Some deceitful species can mimic the flash of another species, doing so to lure a male into becoming dinner.

A nocturnal squid uses the bioluminescent bacteria in its gut to camouflage itself. By casting light downwards it eliminates its shadow and at the same time makes its silhouette disappear when viewed from below. Because the bacteria cannot glow indefinitely, the squid ejects most of it from its gut every morning before bedding down in the sand to sleep. By the time the squid wakes up at night, the bacteria has built up again in its gut and are ready to shine.

Nematodes are microscopic worms that burrows into an insect and vomits up bacteria that makes a toxin that kills the caterpillar which leads to glowy dead caterpillars (!). They're not sure what the benefit of the glow might be but it could be that the light deters earthworms who might burrow through the carcass, disturbing the nematode (this caterpillar is already occupied!).

Some glows have been assigned supernatural origins such as the Angel's glow which has been documented during war, when it was observed that soldiers with glowing wounds were more likely to survive those wounds. It's likely that the glowing bacteria was producing antibiotics that killed other nastier bugs, like gangrene.

So there you have it - Brontës, cookbooks, and bugs. A most informative afternoon.

Find work in the catalogue by: