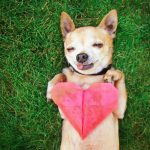 St Valentine is known as the patron saint of lovers. Valentine’s Day is celebrated each year on 14 February by people giving presents of cards, flowers (often red roses) and sweets or chocolates.

Who was Saint Valentine?

There are at least two Saint Valentines recognised by the Catholic Church.

One was a priest named Valentine who lived in Rome in the third century. He was imprisoned and later executed by the Emperor Claudius on February 14, in the year 269 AD. One version of this story says that Valentine was imprisoned because he secretly married lovers, even though the Emperor Claudius had forbidden it so that he would have a supply of unmarried young men for his armies.

A different Valentine, the Bishop of Terni, was killed the same year by order of the Emperor for being a Christian.

Another story says that Valentine fell in love with his jailer’s daughter, and sent a letter to her the night before he was to be executed – the first ‘valentine card’.