Information on the art works at Ōrauwhata: Bishopdale Library and Community Centre.

The work consists of two ornate picture frames arranged together to form a large book-shaped sculpture.

The frames are made and carved from tōtara wood and each encases an aluminium panel with laser cut text.

There are two distinct types of carving on this work. One frame references the history of the area from a Māori perspective, and on the outer part of this frame the following things are depicted; at the top is Ranginui the sky father and at the base is Papatūānuku the earth mother. Between these two figures are a tuna, (eel) with a traditional net pattern showing the importance of this area to pre-European Māori as a food gathering place or mahinga kai. Opposite the tuna is a kōkopu (native trout) with a juvenile kōkopu at the tail, showing that in past times this place would have been an important breeding ground for these endemic and endangered native fish.

Above the tuna and kōkopu are three human figures representing the inhabitants and Iwi mana whenua of the area. There is also a manu (bird) referencing the importance of the forest which once stood here, fostering a large bird population which would also have been an important food source to pre-European Māori.

On the inner part of this frame is a traditional pattern made from pākati notches and haehae grooves which in this case has been used to represent many eels, reflecting the new name of the area, Ōrauwhata. The text on this panel was given for this artwork by Ngāi/Kāi Tūāhuriri, and is a whakataukī or proverb written by Te Aritaua Pitama and translated, reads;

by their hospitality shown to the people, everyone shall know an iwi.

It refers specifically to this place and its abundant resources as one of the means by which the Iwi mana whenua could provide great hospitality to their guests.

The second frame has carvings in a distinctly European style using, on the outer side, motifs from the New Zealand Gothic Revival which were used to decorate many buildings in Christchurch during times of settlement. On the inner side of this frame is a pattern derived from and referencing the Victorian wooden decorative work which was used extensively on the wooden villas built during the latter part of the nineteenth century and at the beginning of the twentieth century. These patterns represent the occupation and use of the area by European settlers and the Gothic pattern includes apples and plums, referring to the extensive orchards planted in the early days by the Bishop family who have left their name on the place, Bishopdale.

The text on this panel is written by the artist, and is a lyrical snapshot of the area and the broad changes it has gone through over the years from a forested wetland, to orchards and horticulture, and to the present day incarnation as a place of living for the people. The other two elements in this work are the concrete circle on which the sculpture sits which signifies the riverbeds which once flowed through this area, and three rocks, also referring to the boulders which were deposited here by the waters when in flood, and which on another level are representative of the past, the present, and the future.

Tūnga whakahīhī ki to hapori
taking pride in your community

Kaitiakitanga, meaning guardianship is the name given to the artwork. The role of Kaitiaki is about assuring the sustainability and the long term use of our natural environment and resources.

This taonga depicts the circle of life and speaks of kinship of all. It is cyclical in nature reflecting renewal and sustainability and of interconnectedness between the realms of Ranginui and Papatūānuku, Ira tangata humankind, the animal kingdom and the natural environment. It is symbolic of the evolution of life, in which one thing is connected to everything else.

Each element combines, to interact with each other to tell a story

It echoes the past, the present and the future by drawing on the elemental world of tangata whenua, the establishment of the early settlers and their uses of the abundant resources around them and the need to look after our natural environment for future generations.

At the centre of the work is a hue (gourd) which represents the beginning of new life, mana wahine, and honours those who tend children. The hue, a container of water standing in safety, peace and harmony also celebrates ancient traditional knowledge.

On each side of the hue are the streams which thread through the wetlands to replenish all. The wetlands support a multiple of living things which can be seen within the body of the work e.g: Tuna (eel), Īnaka (whitebait), kōura (fresh water crayfish), wētā (insect), and manu (birds) all of which were  major food sources.

The koru represents the remnants of the last lowland forests. Pūtaringamotu (Deans Bush) and Papanui bush that once stretched across Ngā Pākihi-Whakatekateka o Waitaha (Canterbury Plains).

Underground tree remnants and charred logs found throughout Waitaha indicate the great podocarp forest that once grew across the plains containing stands of gigantic mataī, tōtara and kahikatea trees. The forest sustained the children of Tāne mahuta (God of the forest) both human and creature alike. Shelter, food, clothing, and transport were all produced from the forest, finally timber for houses reminds us all of our history.

Below the hue is a basket of kūmara to acknowledge the ancient food source but also to represent the local gardeners who grew fruit and  vegetables for the markets, to sustain us and our whānau. Round stones and shingle represent the land that was toiled to reach the fertile soil beneath for farming.

Above we have kāhu, the soaring eagle who greets us as we travel the plains. Kāhu invites you to spread your wings and fly the mind.

He lives locally in Bishopdale and was very keen to create some art for the library that would inspire the community to reflect on the environment they live in.

The last twenty five years of Gavin’s professional life was spent at Breen’s Intermediate School working as an Arts Educator. He has also worked in collaboration with many other local schools creating wonderful pieces of art for those schools.

Although Gavin is now retired, he continues to produce wonderful pieces of art to inspire and motivate.

Many of his pieces are on display in South Island marae, Universities, Conservation Departments, and in private collections.

Some of his work is also on display overseas with special pieces made for Kurashiki, Christchurch’s Sister City in Japan, in Plymouth in England and also in Holland.

Ōrauwhata: Bishopdale Library and Community Centre is extremely proud to have this taonga on display. We hope that the community will connect with it on many different levels. 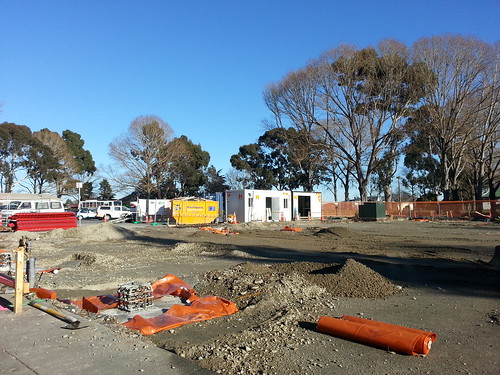