The Universe can count itself lucky that there were no cameramen on hand to record my New Zealand arrival 15 years ago. Months of wailing, breast beating and sad partings had taken their toll. Add to that a Harare detour, a missed connecting flight and a night spent in a Perth Airport Transit Lounge, and what emerged at Christchurch Airport Arrivals Hall umpteen hours later was not a pretty sight.

However, I am looking forward to Christchurch Photo Hunt Competition, with its theme: Arrivals and Departures - the journeys that have shaped us. 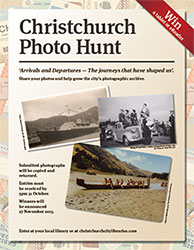 Kiwis are great travellers, and worldwide there is a growing trend for people to live away from the countires of their birth. According to an article in the Jul/Sep 2015 Destinations magazine, approximately 3% of the world's population live outside of the countries in which they were born. Frankly I would have put that figure higher given the teeming masses at the airports I frequent on my annual trips back home (wherever that may be). Maybe I am just seeing the same tired old passengers again and again?

If you are looking for inspiration to get your photographic juices flowing, we have masses of beautiful photography books, and I have a fair smattering of of recent reads on the topic of coming and going - and running on the spot:

On coming home: Kiwis often travel out and wing their way back at some stage in life. Paula Morris has written an excellently researched little book on this topic: On Coming Home. It is a tiny book of only 76 pages about the author's return to Auckland to look after her ageing mother, herself an immigrant. Arriving and departing is inextricably linked to our concept of Home, and this book comes with an outstanding bibliography. Norris's mother sums it up like this:

My mother: I'm not a New Zealander.

Me: You've lived in New Zealand for forty years.

My mother: If I lived in China, would it make me Chinese?

On the lure of the new: The Other Side of the World by Stephanie Bishop is the book I wish I had written. In this novel Charlotte uproots from Cambridge, England, to Perth, Australia, where her husband has landed a lecturing position. It is a book about people who just do not transplant well. People whose rope of yearning is so strong it starts to pull the corners of their mouths down. I have always known that I am not really a mover. Yet here I am. This book was written for me.

On to-ing and fro-ing: Justin Cartwright grew up in South Africa, but lives in England. Several of his books are about the pull that South Africa still exerts on him. Books like White Lightning, To Heaven by Water and more recently Up Against the Night. In Afrikaans (and indeed in the book White Lightning) he is disparagingly referred to as a "soutpiel". This is a man who has one foot in England, one foot in South Africa - and I leave you to work out which part of his anatomy is in the salty Indian Ocean.

On staying put: My choice here is Tim Winton's latest book Island Home: A Landscape Memoir. This is a beautiful song of praise for how the land that we love makes us who we are - in this case the land is Australia. You get the distinct feeling from this book that Tim Winton would wither away if he had to live away from his beloved country.

But don't think that you have to be the world's greatest Frequent Flyer to enter the Christchurch Photo Hunt. Maybe you just went on a picnic from Sockburn to Spencerville Park and you have a great photo of it. Maybe someone took your photo as you left on the bus from Worcester Boulevard (in the good old days) to take your place at Uni down south.

Help us flesh out the full panorama of all our arrivals and departures over the years. Every Picture Tells a Story!