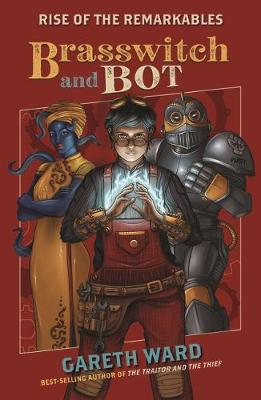 Brasswitch and Bot is the first book in an exciting new steampunk, fantasy series from the splendiferous pen of Gareth Ward—magician, bookseller, and winner of the Storylines Tessa Duder Award in 2016 and Sir Julius Vogel Award (Best Youth Novel) in 2018.

I absolutely loved Gareth Ward's earlier books, The Traitor and the Thief, and The Clockill and the Thief, so I was really excited to hear that he's writing a new series—although I was also a bit disappointed that he hasn't written a third book in the Traitor series—yet! This book was just as much fun as his other two, though, so I wasn't too disappointed!

Wrench (short for Wren Chester-Harris) has an uncanny knack for machinery. In fact, she is able to cajole the metal, cogs, and wires that make them into doing just as she wants. You'd think that when she uses her ability to save the lives of her fellow passengers from a near-fatal tram accident, that they would be grateful. But no! People with her ability are known as "Brasswitches." They are hunted down, just like in the witch-hunts of the past.

Suddenly, Wrench is being arrested by the Regulators and interrogated by the sadistic Captain Flemington. Things are looking exceedingly dire when a curious mechanoid by the name of Bot interrupts the interrogation and whisks Wrench away. But Bot is a Regulator, too. In fact, he's the leader of the group tasked with hunting down the most dangerous aberrations—people like her, who have special powers caused by a long-ago rupture between the dimensions which let unspeakable evil into the world.

Should Wrench trust Bot and his team? Or will they turn on her, leaving her friendless in a world full of superstition and prejudice? Is she really a Brasswitch, or is she just a clever girl in a time and place when girls are not supposed to be clever? And what about the accident that killed her parents? What really happened, and was Wrench somehow to blame?

Excitement and trepidation in every direction! I loved the sense of being thrown into the middle of things, of not knowing who to trust, or which way to turn. And I loved the crazy, steampunk version of York in England, with it's crackle-trams, walkomobiles, and steam-powered coaches.

There are wonderfully crazy machines, like the Scotch dog, which is a cross between a robot guard-dog and a set of bagpipes, and plays the "Flower of Scotland" to warn of intruders. There are fantabulous characters, like Octavia, with her blue black skin, tentacles for hair, and her uncanny ability to know what everyone else is thinking and feeling. And there's plenty of intrigue and mystery, too!

Brasswitch and Bot will be launched at the beginning of August—why not place your hold now?

Want to know more about Gareth Ward? Check out this interview.

The Rise of the Remarkable: Brasswitch and Bot
by Gareth Ward
Published by Newtown: Walker Books Australia