Author Gareth Ward (aka The Great Wardini) is a magician, hypnotist, storyteller and bookseller. He has worked as a Royal Marine Commando, police officer, evil magician and zombie, and as a writer and compere of Napier City’s inaugural steampunk murder mystery evening. Born near Oxford in the UK, he currently lives in Hawke’s Bay, New Zealand, where he runs two independent bookshops with his wife Louise.

Gareth’s new novel The Clockill and the Thief is a high-stakes, action-packed sequel to The Traitor and the Thief, which was the winner of the 2016 Storylines Tessa Duder Award for an unpublished manuscript. In 2018 it won the Sir Julius Vogel Award for Best Youth Novel and Best New Talent and was a Storylines Notable Book. It was also shortlisted for two categories in the New Zealand Book Awards for Children & Young Adults.

I interviewed Gareth about his books and career:

I really enjoyed both the Traitor and the Thief and the Clockill and the Thief. I actually think I enjoyed the second book a teensy bit more than the first, which I think is a great achievement in a sequel!

Thanks.The general feedback I’ve had so far is that Clockill is even better than Traitor, which considering how well Traitor did is pretty cool.

The stories are quite unlike anything I’ve read before. Can you tell us about the inspiration behind Sin’s story?

I was sitting at my writing desk and the notion that Sin would be a really good name for a character popped into my mind. I did a bit of checking and couldn’t see that it had been used before and so I started thinking about why he might be called Sin. At the same time as I was mulling this over I was wandering around my bookshop, Wardini Books, looking at all the great stories and thinking about which ones I wished I’d written. The Cherub series jumped out at me and so I thought how can I take that concept of kids being spies and make it my own? I decided on a Victorian setting and the world of Sin started to form.

The zany, ingenious contraptions the COG operatives use are really something else! I especially like the tweets! And NB30 the “something to do with Non-Newtonian Liquids” fabric. I know my son would love to have something made from oobleck fabric! Where do you get all those ideas from?

Some of my ideas are based on real science; there is currently research into using ‘Non-Newtonian Liquids’ in the next generation of body armour, and it is actually being used in certain brands of protective sports gear. Other inventions I just make up because I think they are awesome or because I need a way to achieve something in the plot. Others, such as the ZAPO lighter are based on real Victorian inventions. 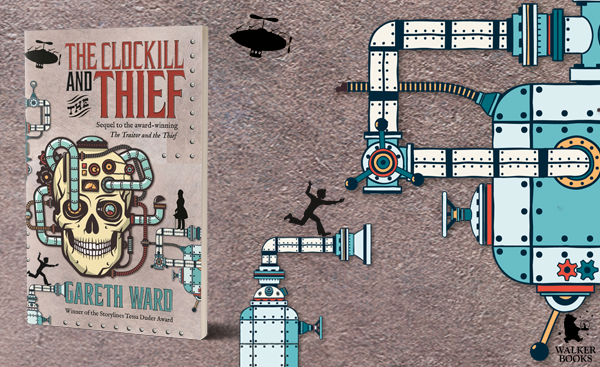 Which of the inventions in your books do you most wish was real?

I think Ironglass would be fantastic. The creations that could be made with glass as strong as iron would be amazing.

The Clockill are a wonderfully creepy enemy. The reminded me rather a lot of the Borg from Star Trek — if the Borg had been created with clockwork and steam power rather than nanoprobes. Eldritch also reminded me a little of a Star Trek character, the holographic Moriarty. So I’m curious, are you a Trekkie?  (I rather hope you are, or those references will mean very little to you!)

I’m sorry to say I’m not a hardcore Trekkie, although the Borg did genuinely give me nightmares. They weren’t consciously the spark for the Clockill but subconsciously, possibly. There have been a few different versions of automaton in Dr Who, and certainly some clockwork ones, and I think these were more of an inspiration. Also, the T800 from the Terminator movies.

Are you a sci-fi and fantasy fan? Do you have a favourite genre?

I am a sci-fi fan, although I probably read more fantasy these days. I am a complete D&D geek and play an awesome Wizard called Tarquin The Honest. I love reading Y/A and prefer something with a fantasy, magical, sci-fi element to it.

Who was your favourite author when you were a kid?

I’m not sure I had a favourite author. I read a lot of war books; when I was a kid WWII wasn’t that long over. I loved Lord of the Rings, Hitchhiker’s Guide to the Galaxy, and in my mid-teens anything by Terry Pratchett.

Can you tell us about what you’ve been reading lately?

I really enjoyed The Rift by Rachael Craw, The Lockwood & Co series by Jonathan Stroud, ‘Lizard’s Tale’ by Weng Wai Chan and Between by Adele Broadbent.

I am a massive Harry Potter fan, although the dog was actually named by my daughter. I tell everyone that I am Gryffindor although I haven’t actually taken the test.

Who is your favourite Hogwarts professor?

Minerva McGonagall. I know it wouldn’t have been such a great story but I think she could have sent Voldemort packing by herself, possibly with just a stern look.

You have had some really unique jobs! Magician, Police Officer, and even zombie!? Earning a living as the undead really beats all, how DID you get that job?

We had a horror maze in Hawke’s Bay and I turned up and said I wanted to be an evil undead magician and they leapt at the chance. The character of Noir in my novels is loosely based on the character I played in the maze.

Which of your many jobs did you most enjoy?

I enjoy being an author the most. So far no one has tried to kill me, which now that I’m older I feel is a real positive in a job.

I hear you like jobs that allow you to wear awesome hats. Which hat is your favourite? What kind of hat would you like to try next?

I am equally fond of my magician’s top hat and my bowler hat. Next, I think I would quite like a steampunk version of Boba Fett’s helmet.

I read on your website that you were born in Banbury. I have to ask, did you ever ride there on a cock horse 😉 ?

I never have. Trivia time. In the nursery rhyme the line ‘to see a fine lady upon a fine horse’ is perhaps thought to reference Lord and Lady Fiennes who lived at Broughton Castle near Banbury.

I thought the names you had for different places and countries were fantastic! Is Coxford modelled on the real Oxford?

Coxford is very much modelled on the real Oxford. I have made Lenheim Palace a bit closer than the actual Blenheim palace and have used artistic licence elsewhere but Oxford was the base.

I love Zonda, she’s such a fabulicious character. Her idiosyncratic way of speaking really tickled my funny bone. Can you tell us a bit more about how you came up with her? Is there a real life person behind Zonda’s character?

Zonda’s way of talking probably comes from my wife’s Uncle Keith, who used to come out with some fantabulous words and phrases. The character of Zonda herself is based on my daughter, who is an absolute inspiration to me for just being herself and not giving a stuff what others think of her.

One of my favourite scenes was the one where Zonda shares her last chocolate éclair with Velvet and Sin. It was rather sweet and touching, and I really appreciated the bit about the memory of chocolate on their fingers. Do you also like to make sure you have a secret stash of cake?

I really liked that scene too -  thought it had depth beyond the words on the page. Very occasionally you write something and think, ‘that’s good’; that line was one of those rare occasions. I don’t have a secret stash of cake but I am terrible when I’m writing and tend to graze through all the sweet food in the house.

I would have to say Griffin’s Toffeepops, who I keep mentioning in the vague hope that they will send me a year’s supply to help me with my writing.

At the start of the first book, Sin hadn’t learnt to read. I struggled with reading as a child, and was the only kid in the magenta group (the worst one) in my class at school. I rather like reading about characters who can’t read as well as the other kids. Can you tell us what learning to read was like for you?

Reading was never a problem for me but writing was. I had special lessons to try and make my writing legible at school and in my early years the general consensus was I was a bit ‘backwards’, purely because my writing was a complete mess. Strangely I think part of the problem was my mind was always racing away so fast my hand couldn’t keep up when I wrote.

This book kept me guessing longer than the first book, and it was just as exciting. Please tell me there is another one coming sometime!

I hope there will be a third book to round out the series. I also believe I may be launching a brand new series next year which has some superb characters in it and I am very excited for everyone to meet them.

I will definitely be keeping my eye out for whatever wonderful adventures you share with us next!