1. (noun) almanac, Māori lunar calendar, calendar - a planting and fishing monthly almanac. For most tribes the lunar months began with the new moon, but for some with the full moon (Rākaunui). The start of each month was aligned to the morning rising of particular stars. The maramataka names are similar for most tribes, but the order may vary from tribe to tribe.

Rangi Mātāmua, Ngāi Tūhoe, is a professor at the University of Waikato who, in addition it forming part of his field of research, is passionate about Māori astronomy and star lore. He is considered one of the world’s leading indigenous astronomers and scholars and pivotal in the revitalisation of Māori astronomy and mātauranga Māori. His work is based on the work his tipuna/ancestor Te Kōkau Himiona Te Pikikōtuku undertook with Royal Society Te Apārangi in the 1800s. Professor Mātāmua is the author of Matariki: the Star of the Year and Matariki: Te whetū tapu o te Tau.

A great resource relating to the maramataka is Living by the stars with Professor Rangi Mātāmua, a Facebook page set up by Mātāmua to discuss the maramataka and other star related kaupapa / topics. His live streams give simple explanations of the maramataka and the differences between it and the solar Gregorian calendar.

The maramataka is a:

“...Māori environmental calendar that uses the lunar phase as a baseline. You can see the change daily in the lunar phase – that is your baseline. You relate that sign to all other environmental changes such as migration of birds, spawning of fish, flowering of trees and that gives you your Maramataka. These [signs] will be different from place to place, so it’s normal [for your maramataka] to be different [to others.]” Professor Rangi Mātāmua, Living by the stars, 30 March 2020

All indigenous peoples have some form of lunar-based environmental calendar that over time was replaced by the Gregorian solar calendar, for instance, the First Nations of Ontario 13 Moons lunar calendar. “In each Nation, Ojibwe, Cree and Mohawk there are many different names and variations of the 13 Moons.” (p5, Ontario Native Literacy Coalition).  Another Ontario First Nation people the Anishinabek Nation, also follow a similar lunar phase calendar called 13 Grandmother Moons.

In Hawai’i they not only follow a lunar phase calendar for hunting, harvesting, planting and fishing, they also use them for voyaging as seen in this Hawai’ian Lunar Month. The 2020 Kaulana Mahina (Hawai'ian Lunar Calendar) provides Hawai’ian stories and information about their Lunar traditions.

Professor Rangi Mātāmua notes that once in New Zealand every hapū and Iwi had their own maramataka and that “there is a coalition between them and some names are similar, but their application is different.  [This is because] each maramataka is based on the rising and/or setting of the moon in association with the position of the sun…” in those areas.  (Professor Rangi Mātāmua, Living by the stars 30 March 2020) 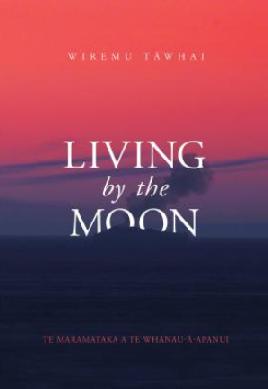 An excellent example of a maramataka is Living by the Moon - Te Maramataka a Te Whānau ā Apanui by Wiremu Tāwhai. Written in both Māori and English, Matua Wiremu provides full examples of using the maramataka in the Whānau-ā-Apanui area. He notes that some Iwi not only have different names for the phases of the moon but also start their maramataka at different points.

The maramataka of Te Whānau ā Apanui is in two phases. Phase One begins with the full moon – Rākaunui and ends 15 days later with Mutuwhenua. Phase Two begins with the rise of Whiro – the new moon and ends with Turu. 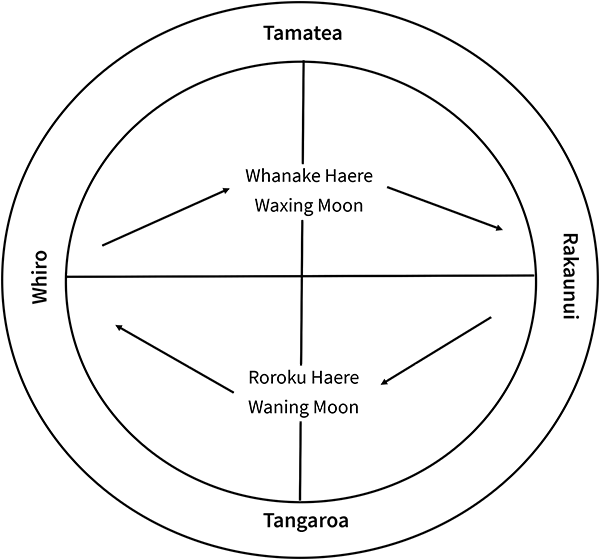 Phases vs days of the maramataka

Both Tāwhai and Mātāmua note there are no days in the maramataka; they are part of the solar calendar.  Instead, there are phases of the moon that are divided into divisions of 24-hour periods of a night and a day. The next phase begins on the next night.

Matariki rises each year in the phase or time of Tangaroa during the cold months. These dates can be found at “when to observe Matariki” and in Matariki the star of the year courtesy of Te Wānanga o Aotearoa and Professor Mātāmua.

Months of the maramataka

Professor Mātāmua notes that all months of the maramataka get their names from the star that rises before the sun. Naturally, as time passes the star rises further and further into the sky until approximately 28 days later it is replaced by a new star, thus signalling a new month.Over time these names have been given to the months of the solar calendar, which Professor Rangi notes is incorrect. This is because they relate to lunar phases and not solar phases so easily get out of synch - this can create some confusion around which names to use.  To avoid this confusion Professor Rangi recommends that if you are following the solar calendar then use the “loan” Māori words like ‘Mei’ for May or ‘Hune’ for June.

There are only 354 days in the Maramataka, 11 days less than the Gregorian solar calendar.  Therefore, similar to the additional day in a leap year, every three years the Maramataka is reset with the addition of 33 days as a month known as ‘Ruhanui.’

It is a time when nothing or very little is done. There are different ways and different times when some Iwi do this, however the lunar month of Pipiri, following the lunar phase of Tangaroa is the most favoured.  The next Tangaroa lunar phase following ‘Ruhanui’ is when the rising of Matariki is celebrated and we welcome the Māori New Year. Professor Rangi Mātāmua discusses it more on Living by the Stars with Professor Rangi Mātāmua – when to celebrate Matariki.

When to celebrate Matariki

Posted by Living by The Stars with Professor Rangi Matamua on Monday, May 25, 2020

It is because of the addition of ‘Ruhanui’ this year that we celebrate Matariki from 13 July and not in June. However, as Professor Rangi Mātāmua states, different people will celebrate at different times and so some celebrations may still be held in June.

Dates of the maramataka

Hina: An application designed to be a guide using the phases of the moon. It offers a te Reo Māori setting and the ability to explore Pacific maramataka including Tahiti and Hawai’i. (available on Google Play)

Star Walk 2: An application best suited for smart phones and/or tablets. Providing the user a 360-degree view, you are able to identify stars, constellations, planets and even satellites. (available on Google Play and iTunes App Store)