Whānau Mārama: New Zealand International Film Festival (NZIFF) 2021 Christchurch has finished. This year's festival had a fantastic collection of both New Zealand and award-winning international films. My favorite part of NZIFF each year is being able to read books in advance or afterward, as most of the films are adapted from best-selling books. If you have missed any movies at this Festival, some of the titles are available via OverDrive. 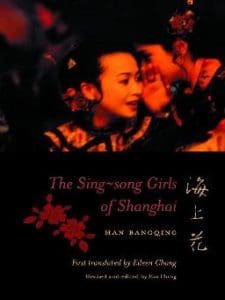 Flowers of Shanghai immediately caught my attention when I was flipping through this year's programme. The movie is adapted from Bangqing Han's 韩邦庆novel entitled The Sing-Song Girls of Shanghai 海上花列传. Set in the pleasure quarters of nineteenth-century Shanghai, this book tells of the romantic games between sing-song girls and their patrons in courtesan houses. Starting with a young man who went to Shanghai to learn how to do business, the story is unpacked along with his adventure to sing-song houses.

The social setting of the book is late nineteenth-century post-Opium War Shanghai. The afterword of the book by Eva Hung reveals the world of Shanghai courtesans. In 1870, Shanghai became the fifth largest port in the world. People swarmed into the city with the waves of international settlement and rural-urban migration. Sing-song houses were established in foreign concessions of this city as brothels were legal there.

The reader will notice scenes and plots specifically belonging to the historical time. For example, sing-song girls served their patrons to smoke opium. They accompanied their patrons to business parties. Sing-song girls' experiences showed how they descended into a mysterious, seductive, and dangerous metropolitan world while being deluded by the impossible dreams of becoming a virtual wife. The social setting of Shanghai as the Eastern-Western crossroads and new modern and urban centre made the courtesan novel unique. It assigned characters a new typology of desire against the Chinese traditional value of virtue.

The plot development is a highlight of the novel. In the history of Chinese literature, philosophic and poetic work was in a position superior to fiction. The Four Great Classic Novels of Chinese literature mark the emergence of the fiction form in China. Their landmark position is attributed partially to two factors. Unlike most ancient literature written in the literary, obscure, classical language, they were written in a spoken language of their time (baihua 白话文) so ordinary people could read and understand. Another feature of these novels is the fineness of plot and character development. It is believed that the achievements of The Sing-Song Girls of Shanghai in these two aspects are comparable to The Dream of Red Chamber 红楼梦, one of the Four Great Classic Novels. This novel is, therefore, regarded as "the greatest work of nineteen-century Chinese fiction".

The Sing-Song Girls of Shanghai is a pioneering work of an urban literary style called Shanghai style, Haipai. Haipai literature is characterised by its innovation, openness, inclusivity, and commercialism. It fuses elements of Western cultures and the Chinese ancient cultures of the Yangtze River. The reader can notice these features while reading this novel.

Despite its value in Chinese literature, this book was little known when published in 1892. The partial reason is that Han Bangqing wrote this book in a dialect language. Han Bangqing was a low-ranking governmental official, who gave up hope of an official career and settled in Shanghai. As a regular patron of Shanghai brothels, he wrote this book in the local language, based on his personal experience and intimate investigation of his favourite courtesans. The reader may be able to recognise that Han Bangqing told his story from a male point of view. In his book, the affection between sing-song girls and their patrons is always regarded as a danger for men to become trapped between desire and propriety.

This book was discovered and reprinted by Hu Shih and others in the May Fourth Movement, as it provoked thoughts on traditional Chinese values. It was translated from dialect language into Mandarin Chinese by Eileen Chang/Ailing Zhang in 1983, and later revised by Eva Hung. In 1998, this book was made into a movie by the famous Taiwanese director Hou Hsiao-hien.