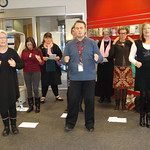 The Christchurch City Council Waiata Group has been in existence on and off since 2000. However, following the initiation of Dr Terry Ryan as Christchurch City Libraries’ kaumātua, it was decided that the group would meet regularly in a more ‘formalised’ arrangement.

The purpose of the group is to tautoko speakers at various occasions that require certain levels of protocol. The group forms an important and integral part of Christchurch City Council’s commitment to biculturalism.

Why Waiata? A perspective from a Waiata Group member

I like to sing I sing and hum along to myself most of the time and often get very strange looks from others along the way as I don’t always realise that I am singing to myself. So thinking only of myself and my own pleasure, I joined the Library’s Waiata group, realizing that here was a chance to sing while I worked and no-one would look twice if I hummed they would just think that I was practising waiata!

I knew nothing of Māori language, culture or waiata, and at first I didn’t consciously try to learn any, but over the years I found that it has crept into my soul.

In the waiata group we have had several tutors who are so passionate about the language and the culture that you become involved and carried along by others’ passion and you learn in spite of yourself and that is when understanding and knowledge begin.

The waiata group is very warm and welcoming, full of laughter and fun and accepting of one’s mistakes as well as one’s dreadful pronunciation. It is a living expression of what ‘whanau’ really means.

The waiata group has taken me on a continuous and continuing journey of discovery. I have learnt so much about the importance of identity and the ties people have to where they come from and to what makes them who they are. In the process I have learnt so much about myself, who I am, where I came from and where I belong and for this I am so grateful.