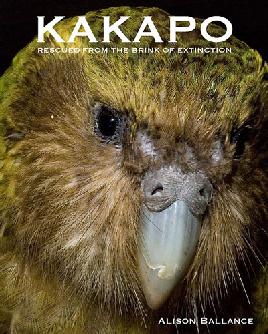 Weighing up to 3.6 kilograms, the flightless kakāpō is the heaviest parrot in the world. It is also the most endangered. The kākāpō lives on a diet of roots, leaves and fruit, and although it cannot fly, it is able to climb trees for food. It walks, rather than hops. It has glossy yellow-green feathers and distinct facial feathers like those of an owl.

A nocturnal bird, the kākāpō lives on its own, apart from the breeding season when males meet in a group and "boom" to attract females. This "booming' can travel up to 7 kilometres in distance. This method of courtship is known as lek mating.

As a flightless bird the kākāpō is at risk from those predators which threaten New Zealand's other flightless birds e.g. dogs, cats, stoats and rats, and from the introduced browsing animals which eat the same food: deer and possums. The kākāpō is very vulnerable to predators - it is always on or near the ground, it has a strong smell, the female looks after her nest alone, it has no real means of defence apart from its camouflage - and it is a good-sized meal for a cat or dog. Its eggs and chicks are an easy food supply for rats and stoats.

The kākāpō once lived in all three islands of New Zealand, but threats to its habitat and the impact of humans and predators have meant its numbers have declined and it is restricted to areas in Fiordland and Stewart Island. Kākāpō numbers had declined to the point that by 1974 it was not certain whether any kākāpō still lived. By 1977 18 males had been found in Fiordland, but without females, the species appeared doomed. The discovery later in 1977 of a population of about 200 birds, including females, on Stewart Island, brought new hope for the survival of the kākāpō, but cats, not stoats, presented the main threat there.

As part of the attempt to increase numbers, colonies of kākāpō were set up on predator-free off-shore islands, but despite these attempts, numbers had dropped to 51 by 1995.

The Kākāpō Recovery Programme was set up to research the kākāpō, especially its breeding habits, to try and increase kākāpō numbers. One factor which seems to trigger a successful breeding season is a "mast" year, when the rimu trees produce large amounts of fruit. The adult birds eat the fruit before it is ripe and just before they are ready to breed. The chicks later eat the seed from the ripened fruit and can increase their weight to up to 2 kilogram in the first 4 months of life. Unfortunately a "mast" year will happen only every 3-5 years.

Attempts are being made to supplement the feed of kākāpō in the wild to try and artificially reproduce the best conditions for a breeding season. Other work involves the artificial incubation of eggs and the controlled release of young birds into the wild.

The kākāpō does not begin breeding until it is 6-8 years old, and its lifespan is not known. Some birds which have been identified under the Kākāpō Recovery Programme are known to be at least 25 years old, and may even be 50.

With a total population of 213 kākāpō to care for, the Kākāpō Recovery Programme keeps a close watch on the health of all the birds, making sure that the islands where they live are predator-free, and improving as much as possible the kākāpō's chances of survival.