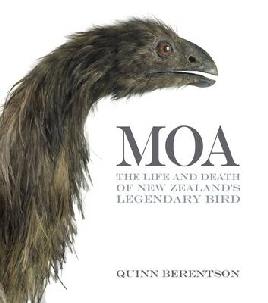 In 1840, Richard Owen, the man who first used the name dinosaur, announced to the world that a bird nearly the size of an ostrich had once lived in New Zealand. He based this on the discovery and examination of a 15 cm long bone found in Poverty Bay. He was proved right as more and more fragments of moa skeleton were found.
Some moa bones have been dated and found to be 2 million years old.

A range of sizes

One of the moa species, Dinornis giganteus, was, at 3 metres, the tallest bird ever to have lived, but only measured its full height when it stretched up to feed off high branches - its normal posture gave its height at 1.8 metres. It would have weighed about the same as a cow.

Moa belonged to the family of Ratites, or flightless birds which have no wings, not even small stubs of wings like the kiwi. Moa are unique in that they have no traces of wings or other bones which are necessary for flight. Instead moa had large, powerful legs, with four toes on each foot.

Large amounts of moa remains have been found on the East Coast of the South Island, but moa would have lived when these areas were still covered with forest. Preserved stomach contents have shown that the moa ate a diet of twigs, seeds, fruit and leaves, and browsed on shrubs, rather than grazed on grass. Some of the specimens of moa which have been found include pieces of skin and mummified body tissue which have been preserved. Others include feathers up to 18 cm long, with colours white, reddish brown, purplish brown, and black.

With more research on the moa, ideas about the way they stood and moved have changed. Early specimens of moa in museums were constructed so that the neck was at full stretch. In the 1980s this posture was changed so that the neck was held in a lower position. It is now believed that moa walked with the head level with or slightly above the level of the back.

Research suggests that different moa preferred different habitat. Some lived in tall, wet bush, while the other species lived on drier grasslands and less dense forest or in sub-alpine areas up to 1800 metres above sea level. Moa probably produced clutches of only one or two eggs. The size of the egg, compared to the body size of the moa laying it, was larger than other birds in the ratite family. Kiwi eggs are also large for their body size, and their chicks are well-developed when they hatch, and able to feed themselves almost straight away. Moa chicks were probably also well-developed and able to feed on their own soon after hatching.

Before the Māori arrived in New Zealand, the moa's main enemy was Haast's eagle, which preyed on adult moa, while chicks and eggs were predated by the now extinct large harrier. The moa was hunted by the Māori using snares, spears, and nooses, or by driving them into pits. Dogs and kiore (Polynesian rat) would also have hunted the moa.

Māori ate the meat, made jewellery from the bones, used the skins for clothing, and made water containers out of the eggs. The extinction of the moa was indirectly hastened by the actions of Māori who robbed the nests of eggs and burnt the forest in which the moa lived. Moa are believed to have died out between 300 and 400 years ago.

In 1857 North Canterbury landowner George Moore discovered moa bones on his property in Glenmark. In 1866 Sir Julius von Haast successfully made further excavations for bones which Moore then gifted to Canterbury Museum. Von Haast traded many of the bones with museums around the world, significantly growing the museum's collection and status.